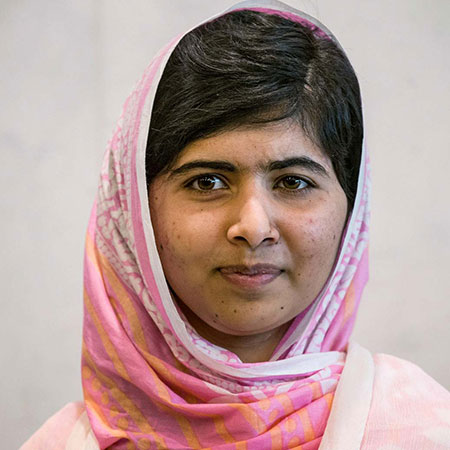 In October 2012, she made headlines after she was shot in the head but survived miraculously.

Since then, she has helped thousands of girls worldwide in education being an idol for millions.

Here is the life story of Malala Yousafzai, the girl who defied death to change the world.

Malala was born on July 12, 1997, to educator Ziauddin Yousafzai and his wife Toor Pekai Yousafzai in Mingora, Pakistan.

The militant group, Taliban, took control of the beautiful Swat valley and enforced harsh punishments and public executions in January 2007.

Taliban banned owning televisions, playing music and worse of all, banned girls from going to school.

Using the pseudonym, Gul Makai, she started blogging about life under Taliban for BBC in January 2009.

Residents of Swat Valley fled in the mid-2009 after Pakistani army moved in the valley to neutralize Taliban.

The New York Times featured Malala and her father, Ziauddin in a documentary about their lives in 2009.

Taliban army were forced to retreat out of the valley and Malala with other students returned to school in November 2011.

She was honored with Pakistan’s first National Youth Peace Prize on 19 December 2011.

October 9, 2012, a masked gunman entered Malala’s school bus and shot her in the head.

She survived the attack and was transported to the United Kingdom for treatment on 15 October 2012.

After finishing treatment and rehabilitation, Malala reunited with parents on 3 January 2013, in Birmingham, UK.

She put on her backpack and school uniform and stepped into the classroom first time after the attack in March 2013.

On July 12, 2013, Malala spoke at the United Nations on her 16th birthday to call for worldwide access to education.

The United Nations declared July 12th as “Malala Day” in her honor.

She published her book I am Malala: The Girl Who Stood Up for Education and Was Shot by the Taliban in October 2013.

She set up a not-for-profit organization called Malala Fund to give education and training to girls aged 14-18 years.

On her 17th birthday, on July 12, 2014, she traveled to Nigeria and met families of victims of Boko Haram group.

Malala became the youngest person to win the Nobel Peace Prize in December 2014.

On July 12, 2015, she opened a secondary school for Syrian refugee girls in Lebanon’s Bekaa Valley on her 18th birthday.

Malala launched a campaign on September 7, 2016, to encourage people to educate girls.

On April 10, 2017, she started a six-month Girl Power Trip to meet girls and listen to their problems and challenges.

Further, on July 12, 2017, she continued her trip to Iraq and Kurdistan and met girls forced out of school by violence.

Visit malala.org to donate and support Malala’s cause to educate girls around the world.