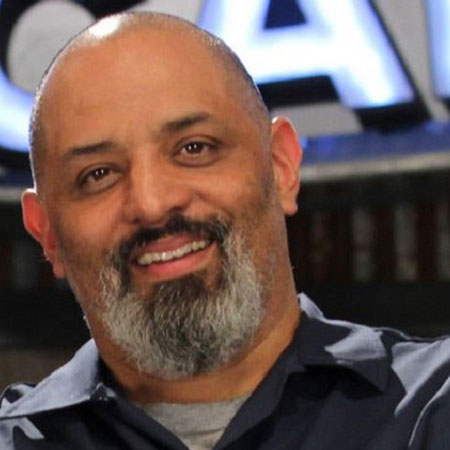 Lou Santiago is an automotive builder and fabricator, who is known for his work in Velocity series, Car Fix.

He was born in 1963, in the Bronx, New York, to a school teacher, Lily, and an ironworker, Raul Santiago.

His parents later moved to Hempstead, Long Island, where he graduated from Uniondale High School.

At his high school, he attended a two-year trade program in diesel mechanics with Board of Cooperation Education Services (B.O.C.E.S).

Afterwards, he, along with his longtime friend and a Mopar enthusiast, Wayne Swanson, started building car at the age of 13.

Lou joined the US Navy in 1981 as a Seabee mechanic supporting Navy Seal Team Eight and served till 1997.

His fabrication abilities helped him fulfill his responsibility of maintaining heavy equipment for the safety of the team.

After retiring from Navy, he joined Central Piedmont Community College, where he achieved an Associate’s Degree in Human Behavior.

Then, he worked as a Behavior Management Technician at a school for children with behavior challenges.

In 2005, his fabricating skills got exposure through Spike TV’s ‘MuscleCar.’ His multitude of car builds and charismatic personality made him a fan favorite.

In 2010, he hosted Discovery Channel’s ‘Ultimate Car Build-Off.’ He is now referred to as the automotive encyclopedia of the car world.

Since 2012, he has been appearing as one of the car customizers in Velocity’s ‘Car Fix,’ with Jared Zimmerman, his ‘MuscleCar’ co-host.

He, along with Louis Lee from All Ends Magazine, hosts the Facebook live show, Playing N Traffic Show, every Thursday at 9 pm EST.

Along with reputation as one of the best muscle car builders in the US, he has accumulated a huge net worth of $700,000.