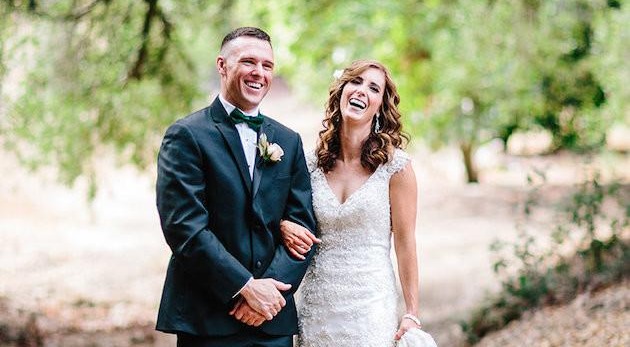 Liz Cho, a WABC-TV anchor,and Josh Elliott, an NBC TV personality finally married in 2015. It is the second marriage for both of them. The two romanced for two years before getting engaged in August 2014.

The wedding, however, will leave both happy and sad remarks on Josh as he lost his mother just a few days before his wedding was scheduled. Thanks to the support from his close friends and most importantly his lady love Liz, Josh got over the sadness soon and wrote a new chapter in his life

THE MONTH OF LOVE Today, we continue our celebration of February the month of love with the wedding of ABC’s Eyewitness News Co-Anchor Liz Cho who tied the knot with NBC News’ Josh Elliott in a soft, flowing Romona Keveza Collection Bridal Gown.#peoplemagazine#lizcho#joshelliott#abc#nbc#goodmorningamericaA photo posted by Romona Keveža (@romonakeveza) on Feb 22, 2016 at 2:20pm PST

The two news anchors, Liz and Josh said “I do” in front of their close friends and family in an intimate ceremony in Montecito, California on a delightful July afternoon. The newlyweds also left an empty seat at the ceremony and at the reception in honor of Josh’s mother who passed away just days before the big day.


Actually, this is the second wedding for both Liz and Josh and it won’t be wrong to say that both of them have experienced the rough and soft sides of marriage previously.

CELEBRATING LOVE In honor of February, the month of love we are reflecting on past Romona Keveza brides and celebrating their love. ABC’s Eyewitness News Co-Anchor Liz Cho with NBC News’ Josh Elliott in a soft, flowing Romona Keveza Collection Gown featured in a People magazine Exclusive.#lizcho#joshelliott#peoplemagazine#powercouplewedding#celebritywedding

Liz Cho was married to Evan Gottlieb, with whom she had her daughter Louis. Their relation was going on well until Liz filed for divorce from Evan in 2012. It is believed that the conflict in their marriage started in 2012. However, the real reason for their divorce still remains a mystery.

Likewise, Josh Elliott was previously married to Priya Narang, with whom he had his daughter Sarina. The two failed to co-operate with each other and could not keep their marriage stable. Hence, they had to break their relation.

The reason for their breakup is believed to be Josh’s addiction for sex. Once Priya caught Josh red handed in an intimate position with the ESPN intern, and after that, there was only one possible outcome. Nevermind, now married for the second time, both Liz and Josh would want to keep their marriage stable and keep conflicts away from their marriage.

Liz and Josh, who had the drowning experiences of failed marriage in the past, are now happily married couples. Parenting their 2 daughters Sarina and Louis, Liz Cho is likely to make a stable and smooth relation with her current husband Josh Elliott.