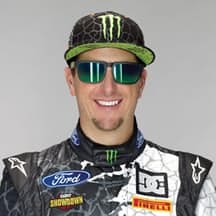 An action sports enthusiast, Ken Block is an American professional rally driver. He is currently working with the motor racing team Hoonigan Racing Division. Ken is also a successful business personality who has co-founded the American footwear company DC Shoes. He was, recently, appointed as Chief Brand Officer of DC Shoes.

Born on November 21, 1967, in Long Beach, California, Block had the fantasy of racing since his earliest days. Famous motor racing driver, Block has made special recognition for himself in the sports world now by competing in many of the action sports events like snowboarding, skateboarding, and motocross.

Talking about his specialized sports career, Ken Block made debut in national rallying career by getting associated with Vermont SportsCar team. His first ever event in the 2005 season was Sno*Drift, where he finished at 7th place in overall and 5th in the Group of class N. Block also had top-five finishes in that season. He was in fact placed at 3rd in the overall Group of class A and 4th in his first Rally America National Championship under his sleeves.

At the end of 2005 season, Block added Rally America Rookie OF The Year Award to his name. With receiving the title of brilliant debutant of the year, Block went off to sign a new sponsorship deal with Subaru.

Block managed to grab his first Bronze in his first ever X Games rally at ‘X games XII’. After that, he ended up second overall in Rally America National Championship. It is his best record to date. Block’s increasing fame lead him to make an appearance in the Segment of a motoring show Top Gear.

Huge net worth owner, Ken was first driver to campaign for World Rally Championship with Ford

On 6th of January, 2010, Block had a tremendous uplift as a team member of Monster World Rally. Block was the first ever American driver to campaign for the World Rally Championship with Ford. The deal, he signed with Ford proved fruitful for him because on February 27, 2010, Block won Rally in the 100 Acre Wood (Rally America) for the fifth consecutive time.

With his high-end career, Ken Block has earned an estimated net worth of $200 million. The greater part of his income comes from D.C shoes. Ken has a Ford Fiesta RS WRC, with 2.0-liter, turbo four which produces as much as 600 horsepower and 665 pound-feet of torque, depending on the gear shift. Ken also owns Subaru WRX STI from signing the deal with Subaru at the peaks of his Rally career.

Ken is very reserved about his private life and doesn’t talk much about it in the media. Ken Block is a married man who is hitched to a lady named Lucy Block.

It came in the news that Ken Block dated his wife Lucy for some time before exchanging vows with her. Presently, he is living a happy life with his wife with no signs of divorce in the near future. His wife supports him to the fullest.

Block has come a long way to achieving the success he had dreamt of. The down-to-earth personality has been awarded on many different stages of his career. More on him can be read at Wikipedia. Also, he can be followed on Twitter and Facebook.