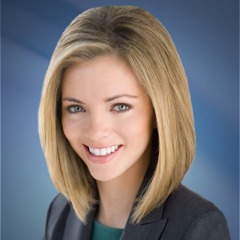 One of the prominent female broadcasting journalists of America, Kayla Tausche, is best recognized for serving as a general assignment reporter at CNBC. She is also known for working as a substitute anchor for the CNBC’s other shows Squawk Box, Power Lunch and Squawk on the Street. Kayla is still working with CNBC and presenting the business news show Squawk Alley.

Kayla Tausche was born on 17 July 1986 in Minneapolis, Minnesota. She was raised in Atlanta, Georgia, where she completed her schooling from Greater Atlanta Christian School in 2004. She further continued her studies at the University of North Carolina at Chapel Hill. From there, she graduated in 2008 with a degree in business journalism & international politics.

She was always interested in journalism and began pursuing her dream while still in college. Her early interest in journalism led her to have a work experience from the Brussels Bureau of the Associated Press. After graduation, she began working at Bloomberg L.P.

Kayla has been married to lawyer Jeffrey Izant since 2015. Kayla is likewise popular for her glowing personality and toned pair of legs which she frequently exposes during her TV shows.