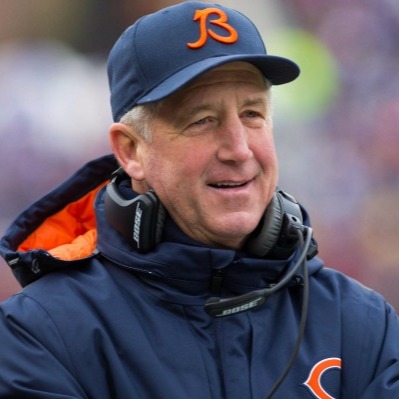 John Fox is an American football coach, who is the head coach of National Football League. Professional football coach, Fox also coached the Denver Broncos and the Carolina Panthers, with whom he won an AFC Championship and NFC Championship respectively, but also lost both of his coaching appearances in Super Bowl. Before being a professional coach, he also enjoyed a playing career.

John Fox was born on 8th February 1955 in Virginia Tech, Virginia, United States. He was brought up by his mother, Kaye and stepfather Ron, in San Diego, where his mom took him when he was 15. He graduated from Castle Park high school in Chula Vista.

While at a high school, he played football under local celebrated coached Reldon “Bing” Dawson and Gil Warren. He played at Southwestern College in California for a year from 1974 to 1975 prior to going to San Diego State.

In San Diego State, he played defensive back with Herman Edwards. There he earned a bachelor’s degree in physical education and also received teaching credentials. Fox then proceeded to the National Football League as a free agent & signed a 2-year deal with the Tampa Bay Buccaneers.

In 1979, he was a defensive back coach, U.S. International University. And the following year, he was defensive backs coach for Boise State University Broncos, when they had winning of NCAA Division I-AA Football Championship.

He was a member of University of Kansas staff, Mike Gottfried. He followed Gottfried to the University of Pittsburgh, where Fox was initially Defensive Backs coach & then later promoted to Defensive Coordinator.

Fox started as a professional football coach in 1985 in the short-lived US Football League with Los Angeles Express. In 1989, he entered NFL as a secondary coach of Pittsburgh Steelers and also held the same position with the San Diego Chargers. Also, he was a defensive coordinator for Los Angeles Raiders & later of New York Giants.

In 2002, he became the 3rd coach of Carolina Panthers. His first regular season game with the Panthers was a 10-7 victory over Baltimore Ravens. In 2003, he led the Panthers to Super Bowl XXXVIII and also led the club to the NFC Championship in 2005 season, where they were defeated by the Seattle Seahawks. His contract ended in 2010, but the owner Jerry Richardson refused to renew the contract.

Subsequently, in January 2011, he was hired by the Denver Broncos as the 14th head coach and signed to a 4-year deal. He is one of the two coach, & only one head coach working still on the NFL sidelines. His contract to be expired in 2014 was extended three years.

Since 2015, he has become a head coach of Chicago Bears. He signed a four-year contract on 16th January.

John Fox is a good husband and father to four

John has numbers of highs and lows in his professional career but is living a fairy tale married life. John and his wife Robin Fox exchanged their wedding vows in 1985 and seems living a happily ever after.

The made-for-each-other couple is sharing three sons: Matthew, Cody and Mark and a daughter Halle together. he is nicknamed as “Foxy” by his close friends. he is an active community leader in the Carolinas. Additionally, his wife and he co-chair the annual Angels & Stars Gala, which aids St. Jude Children’s Research Hospital.

His biographic details are found in various sites. Additionally, his fans can get his latest updates in social media.