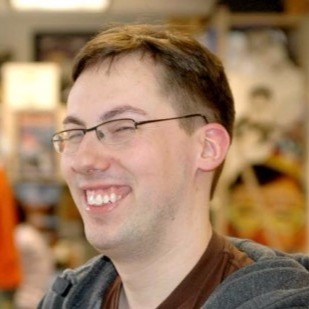 As part of his job, He arrives at the studio in midnight to scour for materials that will be used on the show. His work is intensely laborious as he has to spend his time recording media from the TV, internet and movies. He also appears on the show sometimes. He is mostly known for his queer social skills and has become sort of a comedic punch bag for Stern. Due to this, he earned the nickname of ‘Mushmouth’.

Harmeyer’s relationship with Stern is somewhat an endearing one. Stern has said that if he ever had a son, he would be like Harmeyer. Because Stern likes Harmeyer’s communicative skills (or lack of it), he lets Harmeyer make a frequent presence on the show where he targets and ridicules him.

As for his personal life, Harmeyer has not married yet and does not have a wife. He is dating a girl name Megan. Not much is known about her identity or the span of their relationship. Harmeyer had also once confessed that he used to date girls through online sex chat.

Harmeyer has a body that not many envies. When he started working, he was skinny and lanky at a height of 5’ 8’’. As his job is tough, it barely gave him time to work out and he put on a lot of weight. He wears glasses, has a beard and gangly medium length hair. He has a typical dorky face which complements his personality as a cringe-worthy cheesy looking creep.

Harmeyer has been recognized by his university as a notable alumnus. He also has gained a fan following for his adorable awkwardness. Much of his fame comes from exposure through the Howard stern show. He has a net worth of $300 000.

Harmeyer is also a sports fan. He supports Cincinnati Reds in Baseball and Bengals in American Football. He is also active on his social media accounts such as Twitter, Facebook and Instagram.

Jamie Daniel Harmeyer is an American media producer for ‘The Howard Stern Show’. He was born in December 29, 1979. He is a native of Fairborn, Ohio, United States. He is of white ethnicity and his age is 37

Harmeyer got his education from Lake Gibson High School in 1998. After that, he attended Full Sail University in Winter Park, Florida. He graduated with an Associate’s degree in Film and Video production.