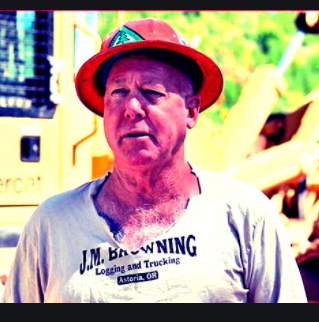 An American logging veteran and reality star, Jay Browning, is best known for his appearance on the History TV series, Ax Men.

He joined the logging industry for the first time in 1971, working for Pete McCoy Logging for a year.

He then moved to Alaska and worked in logging camps for next two years.

Later, he returned to Astoria, Oregon and worked for Pete McCoy and Howard Johnson for three years.

In 1978, partnering with Howard Johnson, he launched a logging company, Coast Logging.

With Coast Logging, he worked for Crown Zellerbach for three years and for Burlington Northern for a year.

In 1985, Jay parted ways from Coast Logging to launch his own company, J.M. Browning Logging Inc, in Clatsop County, Oregon.

He runs his company with the philosophy, “Hire the best in the business and use the best equipment.”

He and his business were a part of the show, Ax Men, during its first four seasons.

He had his left hand torn off during a logging accident. Now, he wears a prosthesis that allows him to operate machinery.

A married man with two sons (who were also featured on ‘Ax Men), he and his family live in Washington.

His granddaughter was killed by the family rottweiler in 2010.

Through his success in the logging industry as well as from several TV appearances, he has bagged an impressive net worth of $900k.