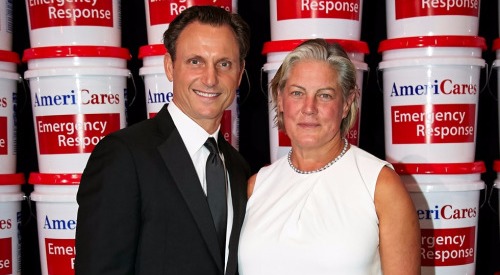 Tony Goldwyn plays a Kerry Washington-obsessed man on the political thriller series, Scandal, but his heart is really on this woman.

Goldwyn has been married to beautiful Jane Musky for three decades now.

She is a production designer and has worked on numerous movies like Ghost, Raising Arizona and When Harry Met Sally.

She graduated from Columbia High School in Maplewood, New Jersey.

Musky and Goldwyn met sometime in the early 1980s at the Williamstown Theater Festival and are married since 1987.

Despite Goldwyn’s controversial role as the US President Fitzgerald Grant III in ‘Scandal,’ the couple has maintained their marriage fresh and lively all these years.

Goldwyn does everything, including making breakfast for her every Sunday morning and planning surprise trips to make her smile.

Likewise, Musky has also been supportive of her husband’s career path for decades and has proved herself an ideal wife and mom.

Musky doesn’t appear in red carpets with her husband. Perhaps, she doesn’t want to stay in the media limelight.

Their daughter, Anna is often seen with him at red carpet events. Many have mistaken Anna to be Jane.