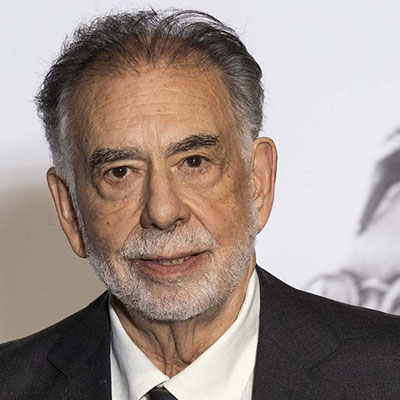 Francis Ford Coppola is recognized as one of the erratic, energetic and controversial filmmakers in America.

He was born on April 7, 1939, in Detroit, Michigan, US as the middle of three children to Carmine Coppola and Italia Coppola.

His older brother was August Coppola and his younger sister, Talia Shire is an actress.

Stricken by polio as a child, he was bedridden for most of his childhood which helped him to find creative ways to entertain himself, including producing his own puppet shows.

He developed an interest in filmmaking at a young age and later studied theater at Hofstra University.

Later, he attended the prestigious film program at UCLA, where he learned from great instructors like Dorothy Arzner and Roger Corman.

Corman gave him a first shot of directing a feature film, Dementia 13 (1963), which he also wrote.

He found his first directorial success with the 1968 musical film, Finian’s Rainbow.

He won an Academy Award for his screenwriting talents for 1970 film, Patton and the success was followed by his greatest hit ‘The Godfather’ in 1972.

His popularity skyrocketed with ‘Apocalypse Now’ (1979), making him one of 8 filmmakers to win two Palme d’Or awards. (earlier from The Conversation)

His most well-known releases of the 80s and 90s include The Outsiders, Rumble Fish, The Cotton Club and Bram Stoker’s Dracula.

Though a number of Coppola’s ventures in the 80s and 90s were critically lauded, he never achieved the same commercial success as in the 70s.

After the late 90s, he stepped away from directing for some time and started focusing on his winemaking business called Inglenook Winery.

He has been married to Eleanor Jessie Neil since 1963 and the couple welcomed three children together.

Their daughter Sofia is a screenwriter and son, Roman is a filmmaker.

His other son, Gian-Carlo, who was killed in a speedboating accident at age 22 in 1986, was also a film producer.