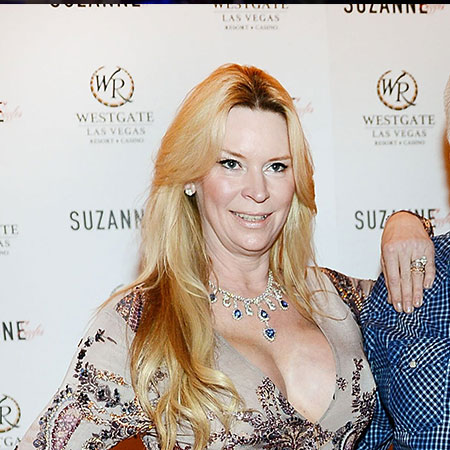 Jacqueline Jackie Siegel is an American model and actress best known in the 2012 documentary, The Queen of Versailles.

Even with her vast fame, Siegel likes to lead a life away from the spotlight. But, here’s is what we dig up on the actress. Please keep reading the article down below to know more about Jackie!

Jackie Siegel was born Jacqueline Mallery on January 19, 1966, in Binghamton, New York.  And as such, Jacqueline holds an American nationality. And as of 2022, Siegel is fifty-six years of age.

The American socialite comes from a white ancestry. Likewise, Jackie was born to John Mallery and Deborah Mallery. What’s more, she grew up in Endwell, New York, USA.

Jackie graduated from Rochester Institute of Technology in 1989 with a degree in computer engineering. She worked for IBM after graduation. However, she left her work and moved to New York City to pursue a modeling career.

Jackie gained the title of Mrs. Florida when she was married for the first time. Moreover, she is now the owner and director of the beauty pageant.

In 2000, Jackie Siegel married entrepreneur David Siegel, Westgate Resorts, a timeshare resort firm. Jaqueline and her husband tied the knot away from the public eye. What’s more, David is 30 years older than her.

Jackie and David are parents to eight children, including two daughters from Jackie’s previous relationship. One of her daughters, Victoria, passed away in June 2015 due to a drug overdose at 18. Now, Jackie raises awareness against substance abuse through the organization Victoria’s Voice.

Jackie and her husband managed to lead a successful married life through thick and thin. What’s more, the married duo will remain free of any ugly rumors and scandals in 2022.

Net worth Jackie Siegel and the Siegel Family

David Siegel’s net worth has seen a steady upward curve recently. Currently, the Siegel family is worth $940 million. Likewise, Jackie Siegel holds an estimated net worth of $50 million.

The couple is famous for their ongoing house project, The Versailles, which will be one of the largest private houses after construction. The extravagant abode reportedly has 13 bedrooms, ten kitchens, 23 bathrooms, and two movie theaters.

Currently, the couple is working on the house. The construction should have been completed by late 2018 or early 2019. However, it now said that the house would be finished somewhere in 2022.

With its value estimated at $110 million, it will be the fourth most expensive property in the USA. David, a billionaire at one time, faced a considerable dip in his net worth during the 2008 market crash.

Read more fun bios on our website! To do so, please visit our webpage: EclebrityFacts!