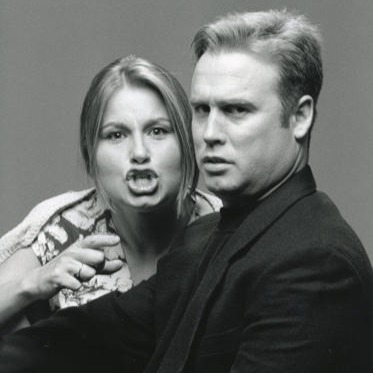 Jennifer Coolidge may have done it hot onscreen, but she keeps it cool in her personal life. She might be secretly married and have a husband for all we know. Let’s find out if that’s the case.

Jennifer Coolidge Dated numerous younger guys in the past, but none worked out well for her.

Jennifer Coolidge is still the swinging bachelorette and has not yet married ever. However, that doesn’t mean she is out of the dating game. When it comes to dating life, she has had many flings. Maybe that ‘bend and snap’ technique is working too well.

Is there a chance she was married but hid it from the public? That is possible as she is very secretive about revealing who she is dating. None of her boyfriends have ever been in the public eye with her.

The closest man we can link her with is Chris Kattan, whom she dated way back in 2001. Chris Kattan is a comedian like her. We can imagine the similarity allowed them to hit it off and understand each other’s sense of humor. They still work together, but who knows if a relationship is under wraps!

Coolidge opts for younger men as far as her taste in choosing men. She has dated many younger boys in 10-15 years after American Pie was set in motion.

Ironically, her personal life was influenced by her professional life when she played the role of ‘Stifler’s mum’ in the film ‘American Pie. Her portrayal was so convincing that people could not separate the onscreen cougar identity from her real-life identity. That resulted in her being only approached by young men in real life.

Coolidge is open about her encounters with men on her stand-up shows. Having dated many men, we understand that she knows a lot about men. Maybe knowing the nature of men too well is the reason that keeps her single and from committing.

The rumor spread like a flood that she was spotted with a new wedding ring, and the couple said “I Do” to each other at a secret wedding ceremony.

After all, why keep your life boring by being married and having a husband when you are as gorgeous and attractive as Coolidge?

She dreamt of being a singer, but life has made her an actress/a comedian

Born on August 28, 1961, Jennifer Audrey Coolidge is an American actress and comedian. She was born and raised in Massachusetts. Her parents: Gretchen and Paul, were plastics manufacturers. Jenn has three siblings, a brother and two sisters. She is popular for her supporting roles in numerous comedy movies.

She first appeared on a television in the Seinfeld episode “The Masseuse.” Then after, she got herself many opportunities to make other people laugh by getting roles in tons of comedy movies.

When she was young, her dream was to become a singer, but she was an actress. She did her schooling at Norwell High School. Then she attended Emerson College in Boston.

We’ll have to wait for her official announcement to know whether she’s dating or married. For now, Jennifer Coolidge has kept a lid on her personal life.