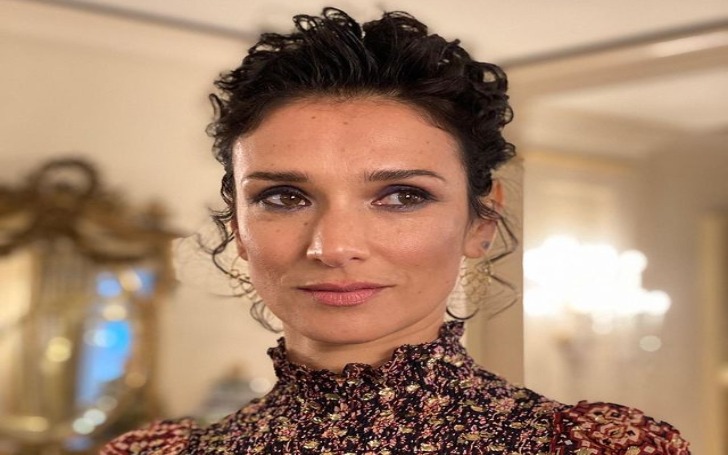 Indira Varma is a famous British actress who is well known among the people for her appearance in the Indian movie Kama Sutra: A Tale of Love. She was able to gain attention from the main character in the movie as “Maya,” who was appreciated and liked by everyone.

Besides, Varma is also a model, television personality, and talented voice-over artist. The Canterbury Tales, Rome, Luther, Human Target, Game of Thrones, Rome, etc., are the other hits of the beautiful actress. Moreover, she has also given her voice to a few video games.

The Kama Sutra star was born on 27th September 1973 AD at Bath, Somerset, England. People also know her as Indira Anne Varma. As of 2022, she is at the age of 48 years. Regardless of her age, she looks so pretty and young to date.

Varma’s father is from India, whereas her mother is of Swiss-Genoese Italian descent. She has no siblings as she is the only child of the Indian-Swiss parents. Varma often felt embarrassed due to her parents’ old age as her parents were mistaken as her grandparents. It may be so because she was born quite a long time after her parent’s marriage.

The Bride and Prejudice actress faced a lot of racism issues in her childhood because of her accent. She used to practice caricature since she was a child, which later helped her grow into a finer actress. Later, as she grew up, she became interested in Dramatics and graduated from the Royal Academy of Dramatic Arts in London. Moreover, Varma also had membership at the Musical Youth Theatre Company.

Indira Varma made her first step in her acting career with the movie Clancy Kitchen as “Kitty” in 1996 AD. It was her debut movie. Later, she got a chance to play the main role in the Indian Movie Kamasutra: A Tale of Love, in which Mira Nair gave her direction. Again in 2004, she appeared in the main role in another Indian movie, Bride and Prejudice, where she co-starred with Aishwarya Rai Bachchan.

Verma’s role in the HBO serial Game of Thrones made her career rise higher. She played her character as Ellaria Sand in the television series, which was quite liked by her fans. Not only this, Varma acted in many other theatre dramas. Other works where she has starred include Shakespeare’s Othello, Harold Pintor’s Remembrance of Things Past, One for the Road, award-winning drama The Vortex, etc.

Later, she became prominent as everyone liked her series such as Psychos, In a Land of Plenty, Love Soup, Paranoid, etc. Her roles became hit one after another. Also, she lent her voice for the videogames like Dragon Age: Inquisition and Mass Effect Andromeda. Sooner, she reached the height of her career and gained different roles to play on different big and small screens.

The Voice Over Artist Varma is also an award winner for her wonderful performance. Her performance gave her both name and fame. In 2014, She won the Behind The Voice Actor Award for Best Vocal Ensemble in Video Game for Dragon Age: Inquisition.

Moreover, for her extraordinary performance in the Game of Thrones, she was nominated for Screen Actors Guild Award. Also, several movies where she had recurring roles got many awards.

Is Indira Varma Married? Learn About Her Relationship Status

The Theatre queen Varma married Colin Tierney, the love of her life, on 29th November 1995. The couple was more than happy to finally tie their knots after dating for several years in the presence of their friends and family. Thus, the actress is no more single.

The beautiful pair together bears one daughter as of now, and her name is Evelyn Tierney. Further details like the date of birth and profession of Evelyn Tierney, the daughter of a celebrity, will be updated soon.

Currently, the couple lives happily with their family in Hornsey, London. Their fans can see them often hanging out together on the award shows and TV Premiers. Hence, there are no rumors regarding their divorce or breakup. However, we will update in the near future if there are any.

Net Worth Of Indira Varma, Does She Use Social Sites?

The Vortex actress, Indira Varma, has a Net Worth of approximately $ 5 Million. She makes her earnings from her career as a successful actress. More details regarding her annual income, monthly salary, Cars, and Houses are still secret. It looks like the voice-over artist of Dragon Age: Inquisition likes to keep her details away from the limelight.

Camille Vasquez: How Rich is she? Learn about Camille’s net worth!

On the other hand, her Twitter account has more than 14.5K followers. She often tweets about her upcoming movies and film promotions. Moreover, both her social media accounts are verified, and it looks like she doesn’t have Facebook and Tiktok accounts.