Skip to content
Home » Entertainment » How Well Do You Remember Sons of Anarchy and SAMCRO? Quiz Time!

How Well Do You Remember Sons of Anarchy and SAMCRO? Quiz Time! 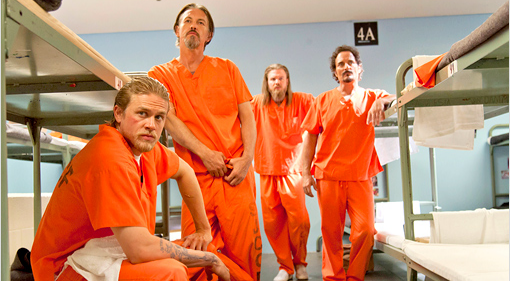 Sons of Anarchy graced our screens from 2008 to 2014, airing for a total of 7 seasons and 92 episodes as the top-rated show on FX.

With an amazing cast and a complex storyline involving brotherhood, loyalty and redemption, fans were like “what’s next?” each time they tuned in. It’s been more than 4 years since the show ended.

So, let’s check out how well you remember Sons of Anarchy. Play the quiz till the end for answers and a surprise!

1. Once, almost all members of SAMCRO served a prison sentence. How long were they in the prison?

2. Who Supplies Guns For SAMCRO?

3. In which season of Sons of Anarchy did Stephen King have a cameo?

4. Who was the first prospect of SAMCRO featured in the show?

5. What is the name of the garage belonging to the club?

Jax and five of his SAMCRO brothers served a light prison sentence of 14 months between S03 and S04 after making a deal with agent June Stahl.

The Irish Republican Army regularly supplies advanced weapons to SAMCRO, who in turn distributes this weapon throughout Charming.

In S03E03, Stephen King makes a cameo as Bachman, a ‘cleaner’ who helps dispose the body of Gemma’s father’s live-in caretaker.

In S01E01, we are introduced to SAMCRO prospect Edward Kip “Half Sack” Epps. As a prospect, he is assigned the menial tasks around the club.

The Teller-Morrow automotive repair garage was founded by John Teller and Clay Morrow, it serves as a front for the motorcycle club and is run by Gemma.