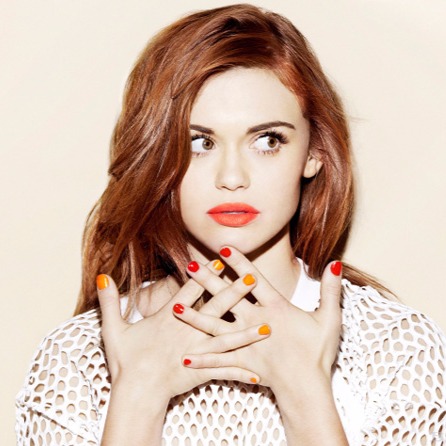 Fascinated by the acting industry at a very tender age, Holland Roden kept her science education aside to create a full-fledged career in acting. Terrific performer, she is one of the most admired thespians on the small screen who has appeared on the popular shows such as “Weeds”, “Lost” and “CSI: Crime Scene Investigation”. She is best known for portraying the character of Lydia Martin in the MTV’s drama “Teen Wolf”.

Holland Roden was born as Holland Marie Roden on 7th of October 1986 from Dallas, Texas, United States. Born in a medical family, her inclination towards science came naturally. Thus, she attended UCLA where she studied molecular biology. However, later she switched her major and earned a degree in women studies from the same university.

American by nationality, thirty years old actress is reported to be single at present.

Drawn towards the artistic discipline at age of six, her very first audiences were her family members. Taking her passion a step further, she joined acting classes and theater camps. However, the reason for her moving to Los Angeles was not her passion for acting; it was her love for science that brought her in the city where she jump-started her acting career.

Just after a year of joining UCLA, she realized that she was more interested in acting and, eventually, ditched her second love for the first one.

Only two months after hiring an agent, she got her first break, a role on HBO’s 12 Miles of Bad Road in 2007. Unfortunately, the show got canceled prior to its premier. Undaunted Holland went on booking guest roles in a slew of series like “Criminal Minds”, “Community”, “Cold Case” and “The Events”, eventually, grabbing a lead role in series “Bring It On: Fight to the Finish”.

While working in “Teen Wolf”, she appeared in an episode of “Grey’s Anatomy”. In the year 2013, she landed a lead role in a horror movie titled “House of Dust”, currently in post-production. Previously, she worked in movies like “Consideration”, “Back at the Ranch”, “Bring It On: Fight to the Finish”, “Charlie Brown: Blockhead’s Revenge” and “Morning Love”.

In 2015, she was roped in to play Lydia in “Cry of Fear”. From working in a wide range of movies and series, she has accumulated a net worth of around two million dollars.

She has been awarded Young Hollywood Award for the Best Ensemble for Teen Wolf in the year 2013. She shared the award with Tyler Posey, Crystal Reed, Dylan O’Brien and Tyler Hoechlin.

Sexy and smoking hot, Holland has the body measurements of 34-25-35 inches which buildup a sizzling hot bikini figure. Her super sexy figure accompanied by her sweet smile has captivated many hearts. She has a height of 1.60 m which perfectly suits her personality.