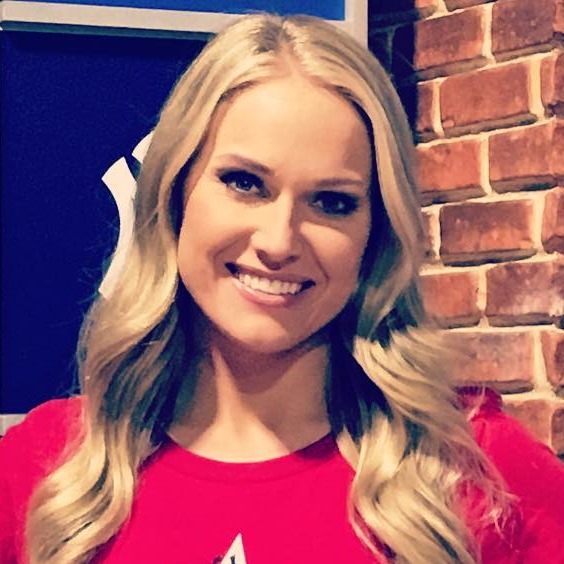 Heidi Watney is an American sportscaster at the MLB network. Her husband also works for the MLB. She is known for her work with the New England Sports Network and Time Warner Cable SportsNet.

Please keep reading the article to learn more about Watney! Likewise, you can find out about Heidi’s birthday and more. So, let us jump in, starting with Watney’s short bio!

Heidi Watney was born on 19 May 1981 to Paula and Mike Watney. Likewise, as of 2022, Watney will turn forty-one on May 19th. Similarly, Heidi was born to her parents in California, USA. So, the sportscaster holds an American nationality.

Watney went to Clovis West High School in Fresno. She was involved in various extra-curricular activities like diving, hurdles, cheerleading, and gymnastics in high school.

ESPN anchor Kate Fagan & girlfriend Kathryn Budig are still together! Know about her coming out journey

Heidi was awarded the National Merit Scholarship during her university years. She graduated from the University of San Diego with an academic scholarship in 2003.

Heidi has worked in different news channels before her MLB career. She has served the New England Sports News in Boston, Time Warner Cable Sports Net in Los Angeles, and two other Fresno networks.

Heidi worked as a sports talk show host for Fresno-based ESPN Radio 1430 KFIG and as a weekend sports anchor for KMPH-TV. She also worked as a host of The Rex Sox Report and The Ultimate Red Sox Show for NESN, a Boston- based regional sports network. She gained good exposure from her NESN career, which started in May 2008.

Time Warner Cable hired Heidi to work as a sideline reporter for Time Warner Cable SportsNet in Los Angeles. After a few years in Time Warner, Watney joined MLB Network in September 2012. Currently, she hosts the show Quick Pitch on the network. The show started airing every weeknight in 2013.

Heidi Watney is a true epitome of beauty with brain

Heidi participated in 2002 Miss California and was titled the first runner-up. The charming lady has been blessed with a perfect figure and long slender legs.

Watney stands at five feet and ten inches and has body measurements of 32-24-36 inches. Her blonde hair and sexy smile make her look even more attractive.

Heidi Watney has been married to her husband for Eight years

Many of Heidi Watney’s fans linked the sportscast with a few sportspersons. And as her work relates to spending time with them, who could blame her fans. Please do keep reading to find out about it down below!

Heidi was once rumored to be dating Jake Peavy, a baseball player. Later, in 2008, rumors about her dating Jason Varitek surfaced. Further, in 2009, yet another alleged news came that was she dating Nick Green.

However, she cleared all the rumors by marrying her boyfriend, Mike Wickham. Watney and Wickham exchanged their vows on 31st December of 2014.

Mike is a baseball executive in MLB. Heidi updates her Instagram with pictures of her husband from time to time.