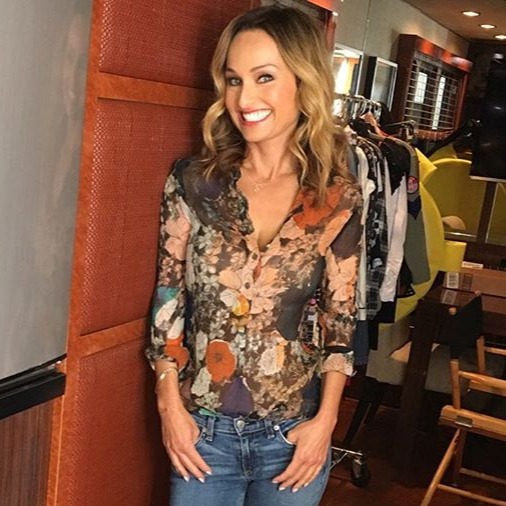 Giada Pamela De Laurentiis, commonly known as Giada De Laurentiis is a woman with multiple talents. She is an American chef, television personality as well as a writer. Currently, she serves as the host of the Food Network TV program Giada at Home.

The eldest child of the family. She is the daughter of an actress named Veronica De Laurentiis and Alex De Benedetti, an actor, and producer.

She has a sister Elosia, and two brothers Igor and Dino Alexander II, who died in 2003 of melanoma. Post her parent’s divorce, she moved with her siblings to Southern California where she was raised.

Her grandfather owned a restaurant and she spent a lot of time there, which created her passion for cooking, during her time at Italy. About her education, she completed her high school education from Marymount High School in Los Angeles.

For her Bachelor’s degree, she attended the University of California. She graduated from there in 1996 with a degree in social anthropology. To pursue her culinary career, she took pastry classes at Le Cordon Bleu in Paris.

Born on August 22, 1970, she is currently 46 years old. Native of Rome, Italy, the Italian beauty is in her mid-forties but possesses a hot bikini body having perfect measurements of 35-24-34 inches. She wears a bra size of 32C and has a feet size of 6.

The celebrity chef has a short height of 5 feet and 2 inches and balances her height with a matching weight of 115 pounds. Considering her hot body measurements, she could easily be mistaken for a bikini model. She has a curvaceous body with round breasts, slim waist and full hips.

On New Year's Day, Giada De Laurentiis exposed her hot bikini body in a bright red bikini in Mexico where she was having fun with boyfriend Shane Farley. He is a producer on the daytime talk show FABLife.

Giada De Laurentiis’s 11 years of marriage came to an end recently as she got divorced from her husband Todd Thompson who is a fashion designer.

Giada was once married to Todd Thompson, a fashion designer, on May 25, 2003. She became pregnant in 2007 and the couple welcomed their only child, a baby girl, Jade Marie De Laurentiis-Thompson, on March 29, 2008. They are divorced now.

As a settlement of divorce, Giada had to pay Todd $9K a month in child support. Todd got their $3.2 million house located in Pacific Palisades and $300,000 in furnishings and art.

He got to keep his membership in the swanky Bel-Air Bay Club. Giada bagged all the rights to an Italian cookbook and also her production company, Linguine Pictures. They divided a total balance worth of $2 million.

Neither of them is getting spousal support as both are rich. They shared joint custody of their daughter, Jade Marie. Both have an estimated net worth of $15 million.

She is now with her longtime boyfriend Shane Farley. The couple was first spotted at a nightclub at Vegas back in August 2015 and since they’ve been together. Where Giada newly divorced from her 11 years of husband, Todd Thompson , Shane is also a newly divorced guy who split from wife Jennifer Giamo last March.

She started her professional career in culinary as a chef in several restaurants in Los Angeles including Spago and Wolfgang Puck. After that, she worked as a food stylist and did a styling piece in Food & Wine Magazine in 2002.

She started her daytime cooking show, Everyday Italian in 2003, which ultimately landed her an Emmy Award. She worked on a Food Network’s biography program called Chefography.

In October 2006, she started hosting Behind the Bash briefly and then got another show Giada’s Weekend Getaways for the Food Network in January 2007.

The same year she presented the Food Networks Awards and appeared as a guest judge on the third season of The Next Food Network Star. She launched an Italian gourmet line Academia Barilla with the Barilla Group in 2008 and also had her show Giada at Home.

She came out with a line of kitchen supplies, exclusively for Target in early 2010. Recently, she opened up her first restaurant, GIADA, in July 2014 inside Cromwell in Las Vegas, Nevada.

She won the Daytime Emmy Award for Outstanding Lifestyle Host. Besides that, she is also the guest co-host and regular contributor of NBC’s Today and founded the catering business GDL Foods. She has a star on the Culinary Hall of Fame since 2012.

Immensely talented Italian beauty, Giada earns a net worth of $15 million with which she is helping her ex-husband support their children but at the meantime, she is also spending a lot of time with her current boyfriend.

Seems like, they will be tying the knot soon. Giada De Laurentiis has a massive amount of followers of 1.36 million on Twitter. She can be followed @GDeLaurentiis