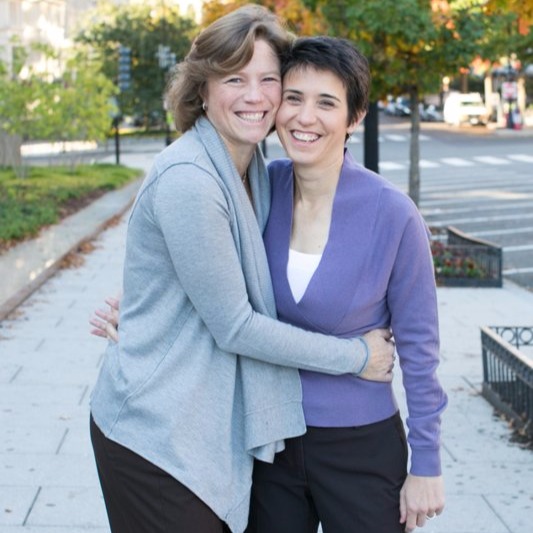 Amy Walter and Kathryn Hamm, the most happening lesbian couple got married for the second time in 2013. Partners of more than 2 decades, the couple shares the same love and affection that they had while beginning the relationship.

Political analyst, Amy Walter began dating her partner Kathryn Hamm in 1993. Almost six years later, they married in 1999. Their wedding ceremony was held on Labor Day Weekend. It was celebrated in a traditional way.

Both, Amy and Kathryn felt that their first marriage was more of a punctuation mark rather than a real wedding. As explained, they escaped several wedding traditions including the first dance, the cake, the bouquets and others because they perceived them as meaningless.

On 2nd November 2013, they legally got married for the second time in Washington D.C. Unlike the first marriage, it was conducted in a more relaxed way. The grey hair and wrinkles made no difference to the joy brought to the couple’s face.

The wedding ceremony was officiated by one of Kathryn’s college friends who serves as a Judge for D.C. Superior Court. They also included their 7 years old adopted son named Caleb in their wedding. The marriage has made them feel more committed to a family.

To spend more than 20 years together with the one you love is not less than an achievement. And for a lesbian couple, it’s really challenging. Walter and Hamm have become truly an inspirational couple to many gay and lesbian couple.

The inspirational couple has also set an example that a woman is always safe and happy with a true partner, whether it’s a man or a woman. We wish more happiness and joy to both of their lives.