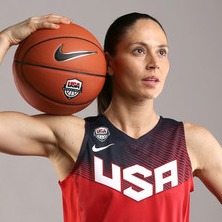 Diana Taurasi is best recognized for her outstanding WNBA career as a Phoenix Mercury player. Diana was listed as one of Top 15 Players of All Time of WNBA in 2011. In 2012, she was named USA Basketball’s Female Athlete of the Year. Likewise, in 2014 she was awarded with WNBA Finals Most Valuable Player Award.

Taurasi has an elder sister named Jessika. She completed high school education from Don Antonio Lugo High School.She started playing basketball since her early days. During 2000-2001 season while studying at the University of Connecticut, she played for the University women’s basketball team.

She primarily played at two position point guard and shooting the guard. With her brilliant sports skill, she led her team to win 3 consecutive NCAA Championships. During her university days, she received many personal accolades which include 2003 and 2004 Naismith College Player of the Year awards, 2003 Wade Trophy and 2003 Associated Press Player of the Year Award.

Diana continued her best form playing in WNBA as well. She was drafted in WNBA playing for the team Phoenix Mercury. Taurasi netted 26 points in her first match in WNBA. Afer several years, she made the Western Conference All-Star Team even though her team didn’t qualify for the playoffs.

In the year 2007, Diana finally made it to WNBA playoffs with the team Phoenix Mercury. Eventually, she became successful to win her first WNBA title for the team.

Her international career started in the year 2005 with playing for the team Dynamo Moscow. However, with the team, she didn’t reach the successful stage. In 2006, she gave new start with joining new Russian team Spartak Moscow.

Diana’s outstanding form led her to achieve huge success. Her team won 4 consecutive Euroleague championships for3 years from 2007 to 2010. On 16th May 2012 she signed a new contract with Russian Premier league team UMMC.

She was even in top form playing with Russian team where she won 2012-13 Euroleague, Russian Cup, and Russian Championship. Diana also won a bronze medal while competing as one of the members of 2001 USA Junior World Championship team.

Diana Taurasi was born to her Italian father, Mario, and Argentinian mother, Liliana.

The famous basketball player is presently single. She has not been married to anyone yet. She hasn’t been in relationships with any celebrities.

Diana Taurasi is currently playing for the Russian Premier league team UMMC Ekaterinburg. You can connect with her on her Twitter @DianaTaurasi.