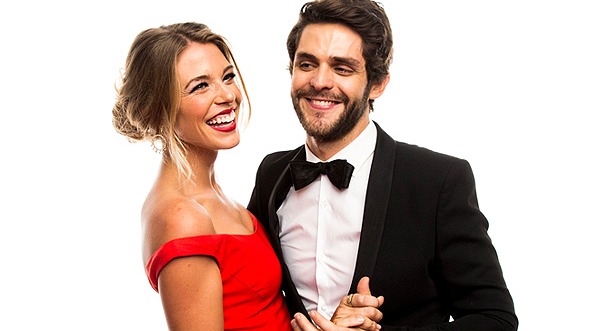 Country singers Thomas Rhett and his high school sweetheart wife Lauren Akins are, by miles, the cutest couples in the country music. The singers are without a doubt one of the adorable and admired couple in the music industry.

It’s not only the cuteness of thecouple that attracts people or brings them into the limelight but a charming chemistry, the couples are incredibly stylish as well. The chemistry between them and the style that the couple possesses were there for all to see at the CMA awards, where the “Die a Happy Man” singer picked up singles of the year awards.

The duo gave a glimpse of what was to come at the CMAs when they posed for the cameras at the BMI Country awards; Like always the duo looked adorable and magnificently stylish. Thomas posed with a silver vest with matching pants and a black shirt with a bow tie.

Lauren though stole the limelight from her husband as she posed with a red gown with deep V-neckline flaunting her stunningly admirable figure. Even her husband was mesmerized by her beauty. He posted her picture on Instagram with a caption “Woo baby that red dress”

The so in love couple tied the knots on October 12th, 2012 after dating for a long time. The couple is still enjoying best moments of their marriage despite some rumors claiming they are likely to separate. The two are yet to welcome a baby in their paradise.

Country singer Thomas Rhett was born to father Rhett Akins and mother Paige Braswell on March 30th, 1990 in Valdosta Georgia. He was born in a family where music was part of their lives. His first contribution to music came in 2010 when he co-wrote “I ain’t ready to quit” for Jason Aldean’s album.

A year later Thomas released his first single titled “Something to do with my hands” which was quickly followed by “Beer with Jesus” both of which made Country music’s top 30.

Thomas stands tall with a height of 5 ft 8 inches and possesses` a perfect body. His admirable personality has matched with his professional success as well. After his debut in 2011 Thomas Rhett has never looked back as his musical journey has been fruitful for him. Some of his hits include Die a Happy Man, Star of the Show, Playing with Fire and Vacation.

After spending more than 5 years in the music industry Thomas Rhett has proclaimed numerous success. His music has landed him with fame and success. In the process Thomas has accumulated a net worth of around 5 million US dollars, which is likely to increase in the days ahead.