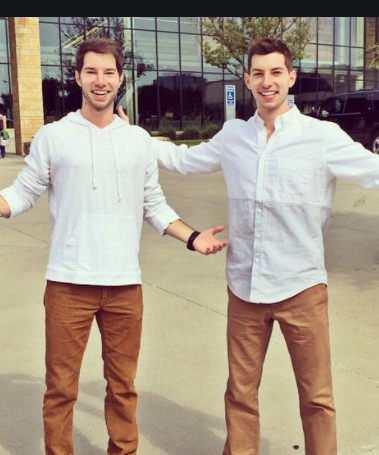 Cory and Coby Cotton are the internet stars, who are best known for their highly famous YouTube channel Dude Perfect.

Their dad Larry Cotton is a pastor, and they are following the Christianity faiths.

They grew up playing tennis, basketball, and dodgeball in the Woodland, Texas and graduated from The John Cooper School in 2006.

Then, they went to Texas A&M University, where they met Tyler Toney and Garrett Hilbert at various Bible study groups.

Once, the four were betting on sandwiches via basketball shots on their backyard, which were recorded on camera and eventually uploaded on YouTube with the title ‘Backyard Edition’ on April 8, 2009.

The video of trick shots went viral and garnered 100,000 views within a week.

The twins, Cory and Coby, came up with a mindset to name their group, Dude Perfect and later asked Cody Jones to join them.

Now, the group of five is widely known for their videos that feature tricks involving basketball shots, golf chips, and football spirals among others.

In their videos, they seem as regular dudes from Texas, who are in constant, hyper-competitive mode.

They claim secrets to the magical shots in their videos is a result of a lot of practice, though people think it might just be tricky camera angles.

The sports and entertainment brand has accumulated the net worth of $20 million.

Cory started dating Amy Surplus in 2015 after meeting her for the first time during an evangelism trip called Unashamed.

Coby got engaged to his beautiful girlfriend, Aubrey Ellett on August 6, 2017.