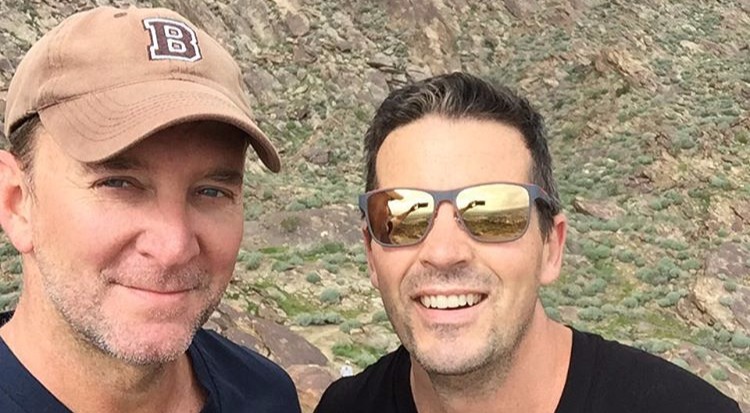 Clinton Kelly and his husband, Damon Bayles, have been married for a long time. Open about their sexuality. The two kept their wedding a low profile, though.

Clinton Kelly and Damon Bayles’ wedded at their home in Connecticut

Clinton has been open about his sexuality for a long time, i.e., since he was a co-host on the reality makeover show What Not to Wear. He dated Damon Bayle long before tying the knot with him in 2009.

Their wedding, held at their home in Connecticut, was kept a low profile and attended by only close family and friends.

The couple is currently based in New York, but they take time off and often head to their home in Connecticut, which he calls a “happy place.”

During a 2014 interview with Hartford Magazine, a Connecticut-based lifestyle magazine, Kelly shared, “Connecticut is my happy place. There is nowhere as nice. When we get here, we stop at the local IGA and get all the food we need for the weekend. And never leave the house. I barely comb my hair. It’s me, Damon and the pets and the woods and some friends coming over. I adore Connecticut.”

Clinton has maintained a stable relationship with his spouse despite his busy working schedule. The couple has no children yet, but they have a special family member, a cute dog named Mary.

Gio Benitez & Tommy DiDario make the hottest gay couple ever. A glance at their wedding pictures

In 2015, Clinton partnered with Devyn Simone to co-host TLC’s Love at First Swipe. On the show, the two helped single women present themselves correctly and find potential mates.

In each episode, they choose a certain woman who is unable to search for romance on their own. The former What Not to Wear host Clinton did a makeover of those women, and Devyn gave them the best of the dating tips.

They taught them how to dress and bring out their otherwise dull personalities to their romantic side. They entirely transformed the profile and personality of those women, helping the poor souls find the lost love of their life.

Clinton worked alongside Devyn for nearly half a year, and during that time, he must have certainly learned invaluable tips from the dating coach. He seems to be practicing what he preached, which is perhaps why his relationship is going so well with his partner.

Bayles, on the other hand, has been helping people deal with various psychological issues. A clinical psychologist by profession, he counsels people battling depression, anxiety, interpersonal and relationship issues, etc.

The Chew co-host Clinton Kelly’s net worth was revealed! Details on his TV shows, books and clothing line

Bayles’ expertise in the field is undoubtedly why the couple has managed to keep relationship issues at bay and live a stress-free married life.