Meet Claudia Bunce from Jade Fever and her family 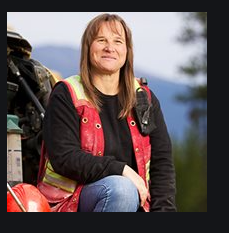 Claudia Bunce is the matriarch of the Bunce family from the Jade City, featured in the Discovery Canada show, Jade Fever.

Born in Pforzheim, Germany, she moved with her family to British Columbia, when she was very young. The family later moved to Jade City in the 60s.

Her father started mining around the Jade City in the 70s and retired in 1992.

From early childhood, Claudia fell in love with jade and returned to Jade City as an adult to take ownership of the Cassiar Mountain Jade store.

Afterward, she helped set up Dease Lake Jade Mining and is now working with her family on her dream of making Jade City the jade capital of Canada.

‘Jade Fever’ premiered on March 31, 2015, and is currently airing its fourth season.

Claudia and her husband, Robin, have two sons, Josh and Justin.

The whole family is involved in the mining business with Josh in heavy equipment and Justin as a jade cutter.

Claudia’s grandchildren have been the best marketers, who have entertained the tourists in their store.

The family’s works of mining, cutting, polishing and selling jade have been interesting to watch, which made the show one of the hit shows on Discovery Canada.

Behind the tough persona that Claudia has as a businesswoman, there is a soft motherly heart.

The fever of jade is something she has since her childhood, but still, her responsibility as the family matriarch is her utmost priority.

Jade Fever, which was nominated for a 2016 Canadian Screen Award for Best Factual Program or Series, continues to pull a legion of fans.