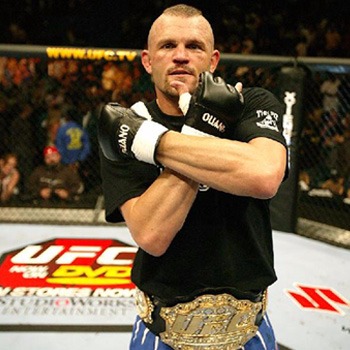 Chuck Liddell, a retired mixed martial artist, is spending beautiful moments with his wife Heidi Northcott after post-retirement. Since getting married in 2011, he has been spending his life delightfully with his better half Heidi. Multiple record holder, Chuck has collected a huge net worth of $13 million so far.

Chuck Liddell was dating Heidi Northcott from a long time after getting separated with MMA fighter, Casey Noland. Chuck has 2 children; a son Cade and a daughter Trista from ex-girlfriend Casey Noland.

After some time of separation with Casey, on 4th November 2010, he put the proposal in front of his girlfriend Heidi Northcott which she didn’t deny.

Chuck and Heidi officially got married in 2011. The same year when he got wed to Heidi, he became a father of a cute little daughter named Guinevere. After two years, Heidi became pregnant again and delivered a baby boy, Charles David Liddell Jr. in 2013.

Check out the recent picture of his little boy Charles and baby girl Guinevere.

Fishing with the kids Charlie caught his first fish

After setting multiple records in themixed martial art, he settled on the choice to end his fighting career on 29th December 2010. He announced his retirement at UFC 125 press conference.

He became very emotional while making the announcement of retirement. At the end of his fighting career, he spoke some heart melting farewell words as “Most of all I want to thank my fans and my family. I love this sport and I’m excited to go to this new stage in my life and keep promoting the best sport in the world, the sport I love… now that I’m retired.”

Lillard faced a defeat in his last three consecutive knockout, due to his which all his friends and family advised him to take retirement. Considering the advice of family and friends, he finally took the decision to end fighting career on 29th December 2010.

Have a look on one of his old pictures with other fighters.

Check out nick one kick’s new show. He is the guy that got me started in both kickboxing and MMA https://youtu.be/YPD91oPZl8o One Kick’s Gym new TV Show every Wednesday at 3pm Stephan Bonnar and Nick One Kick live on WCOBM.com

However, following 3 years of retirement announcement, on 8th September 2013, in an interview on Opie and Anthony Show, he said that “there was a possibility of one last comeback, similar to George Foreman’.

Chuck has achieved a mighty level of success in his fighting career. He made UFC debut in the year 1998. During his first UFC 17 match which was held in Mobile, Alabama, he got victory over the fighter Noe Hernandez.

In his entire fighting career, he had total 23 fights in UFC. After creating many historical moments, he finally got inducted into UFC Hall of Fame on 10th July 2009. Through his UFC career, he has collected gigantic net worth amount of $13 million dollars.

He is presently having a luxurious moment with his family after retirement. Recently a month back, he celebrated the birthday of his son Liddell Jr. Chuck and shared the moment through his Instagram and Twitter.

He is definitely having a quality time with wife Heidi and children after the retirement. Former World UFC Light Heavyweight Champion Chuck Liddell has earned an overwhelming net worth of $13 million from his amazing UFC career.