Christina Applegate marrried Martyn LeNoble in 2013. Second wedding for both, she and husband LeNoble is parenting a daughter. Know her net worth 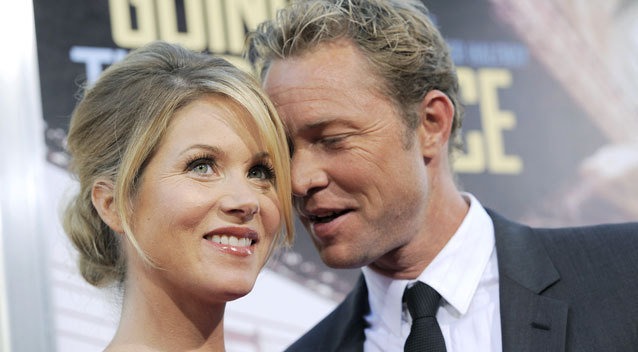 Christiana Applegate married her longtime boyfriend Martyn LeNobel in 2013. The celebrity couple is now parenting their 5 years old daughter Saide. This marriage seems to be running smoothly as compared to the previous relationships they had.

Christiana met Martyn in 2008, after her divorce with her then-husband Johnathan Schaech. After spending some time together and developing a good rapport in between each other, the Hollywood actress found love in Dutch bassist LeNobel.

Since their hook up in 2008, Christiana and Marty have been able to maintain a cordial and stable relation. It might be a reason that no rumors of them getting involved in other relations or plans for possible divorce in the future has ever emerged.

My sweet Valentine. I love you.

Now parenting their 5-year-old daughter Saide, they both are getting the best of their marriage. Saide is the first child of Martyn and Christiana. Sadie was born on July 21, 2010, two years after the celebrity couple committed into the relationship. The child has given a new dimension to their relation and has added new excitement in their relation.

Christiana Applegate may have faced some bumpy roads in her personal life but her acting career has always been a satisfying one. The Emmy award winning Applegate is one of the most beautiful and talented actresses that has graced Hollywood.

Applegate was just 7 years old when she made her first appearance on the silver screen through Jaws of Satan. Her career afterward is filled with stardom

Christiana Applegate, 44, has seen it all, from being a successful celebrity to facing the agony of a broken relation to finally settling into a stable relation with the second husband. Even in the twilight of her career, she has a whopping net worth of 20 million dollars.

With the financial success in one hand, Christiana Applegate is enjoying the blissful moments with husband Marty LeNobel and daughter.