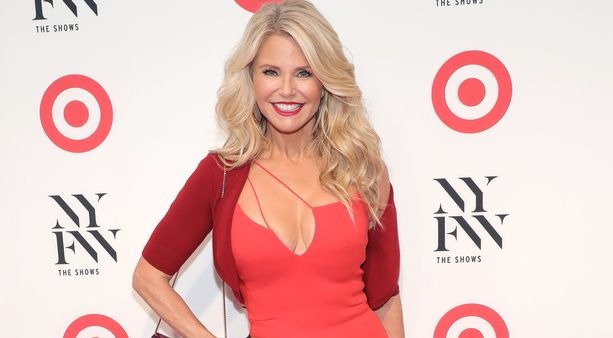 Christie Brinkley rocked the New York Fashion Week with her tight fitted red dress. Thanks to her perfect body measurements, she looked sensational. Let's take a look at her net worth and ex-spouses.

Age is just a number for Christie Brinkley. She didn't seem like 62 when she showed up in a stylish strapped tight red dress at the fashion event. Whom does she credit for her appearance? How does it affect her net worth? Let’s find out.

Christie Brinkley rocked the floor with that alluring figure. Yoga workouts and cardio exercises are her fitness secrets.

A former model, Brinkley knows how to invest time and money on herself. She went on a vegan diet to keep up the glow of her beauty. It’s the yoga workouts and cardio exercises that have maintained her even at this age.

She was seen conquering the fashion event on September 6, 2016, with her eternal beauty and sensational body. She wore red lipstick, red stilettos, and minimal accessories to match with her bold red dress, designed by Victoria Beckham and accompanied a cropped cardigan and shiny handbag.

She had a blast at the event. She shared a video of her on Instagram having fun with her friends.

Since everyone is appreciating her appearance and asking the secret behind it, she credits her gym, where she performs her workout routines.

If you want to know how she maintained her 36-24-35 inches body and every detail of her secrets then check out her book, Timeless Beauty, in which she has spilled all of her secrets. She has revealed it is totally dedicated to her fans who want to know what she’s been doing.

In an interview with Hamptons magazine, Christie said of her book, "Enough people seemed to want to know how such an ancient model from the Stone Age had “rocked” that swimsuit – was it diet, exercise, or all makeup and hair tricks? Well, it was actually all of the above, so I started writing."

She likes to keep everything simple and natural so other than her revealed diets and workouts, she hasn’t done anything to boost her appearance.

In November 2015, Christie revealed the secrets behind her ageless beauty in an exclusive interview with Fox News Magazine.

Now everyone knows her secret!

Her professional earnings to spending on her appearance: Effect on Christie Brinkley’s cash flow. Meet her ex-partners.

A well-known model, Brinkley has signed numerous brand endorsing contracts since the 1970s. She is best-known as a model to appear in Sports Illustrated Swimwear Issues. She has appeared on the cover of numerous famous magazines.

Other than her contribution in the fashion industry, she is also an actress, designer, activist and much more. She has appeared in music videos too. She was in the third spot in Daily Mail’s World’s 20 Most Abundant Models in 2012.

Her modeling career has added a huge amount in her net worth. She has released a book in which she has revealed her secrets of youthful appearance. The sales of this book also add up in her net worth.

She is a fitness freak. She goes to the gym and follows diets but her expenses are unknown. It might not have a major effect on her $80 million net worth.

She was first married to Francois Allaux on 1973 but later divorced in 1981. She then tied the knot with Billy Joel. But the couple separated in 1994, after 9-year long marriage. Not much long after their split, she paired up with Richard Taubman but the marriage didn’t sustain for a year.

In 1996, she married Peter Cook and as history repeats, their nuptial ended in 2008. Though she’s been unlucky in love, sooner or later she'll find her perfect match.

The ageless beauty has proved she can still give competition to young models. Her sensational appearance at the New York Fashion Week in her red dress says it all. Her ex-spouses must be regretting now! Christie Brinkley's massive net worth of $80 million is also on the rise.