Earning a lot with her Dual Role at ABC and CNN! What’s the Net Worth and Salary of Christiane Amanpour? 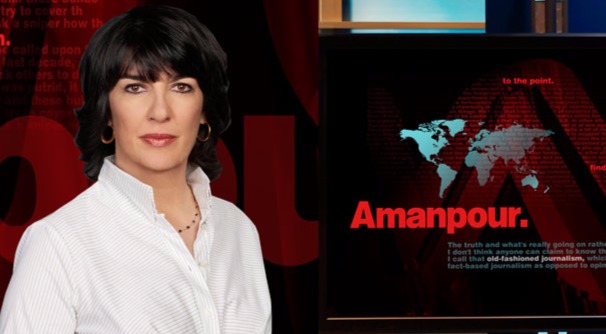 Christiane Amanpour is still going on strong and earning a sizeable salary. With a net worth of $12.5 million, she’s ruthless in her mission to be on the front-line to report stories of the countless atrocities in the midst of international chaos. As they say, “Where there is war, there is Amanpour.”

We were quite stunned to see this latest campaign by the Syrian Government… a tourism ad. https://t.co/wsMYa5AnGH

The Iranian Revolution laid foundations for her interest in story-telling.

In 1979, one fine evening in Tehran, Amanpour was sitting on the porch with her family, when she heard a voice being broadcasted from a mosque preaching revolution. Little did she know, it was the onset of the cataclysmic event which will not only tear apart her dreams but her country as well.

Having witnessed and experienced The Iranian Revolution firsthand, Amanpour was motivated to be involved in such catastrophic events again, but this time not as a victim but as a storyteller.

“An accidental journalist” is how Amanpour amusingly describes herself. This is because her journey towards journalism began when she decided to continue a journalism course in which her sister was dropping out to save tuition money. Few months after that, she studied journalism in America where she interned in CNN.

Her big break came during the Gulf War in which she was the foreign correspondent responsible for reporting for. Her other most recognized work include covering the conflict in Bosnia. In no time, Amanpour was traveling all over the world as a CNN international correspondent, especially in active war-torn areas to unearth stories that most wouldn’t dare to touch on.

Amanpour began her work on ABC from 2010. She left CNN briefly to be the host of ‘This Week’. On December 2011, she left the show and returned back to CNN International. She did, however, maintain a reporting role on ABC and is till date the global news anchor for ABC.

As of 2009, she became the host for her own show called “Amanpour” where she interviews politicians or high-profile newsmakers

As part of her grueling and intensive approach to media, Amanpour also earns a whopping $2 million dollars in salary annually. Added to that, she has amassed a net worth of 12.5 million dollars. However, not any amount of money can amount for the risks Christiane Amanpour puts in her life which is priceless

.@camanpour about to go live on @NewDay with @Nigel_Farage, @ChrisCuomo, @AlisynCamerota. pic.twitter.com/R2u7sg2oON