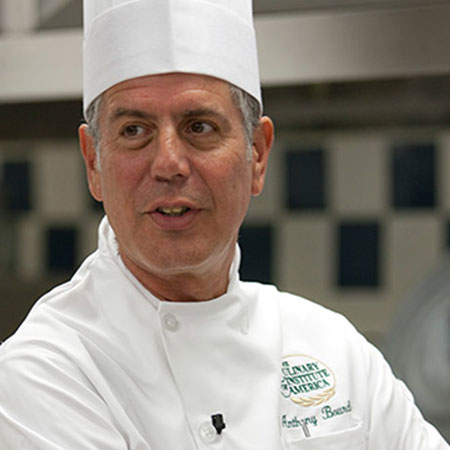 The culinary industry was struck with sadness when CNN announced the passing of TV host and celebrity chef, Anthony Bourdain.

It was on June 8, 2018, that Anthony was found dead by his fellow chef and close friend, Eric Ripert, in his room at the Le Chambard hotel in France.

Hailed as the rock star of the culinary world, Anthony earned high acclaim for his comical and mordant autobiography, Kitchen Confidential: Adventures in the Culinary Underbelly.

Anthony, who joined Twitter in 2008, has earned more than 7 million followers with over 13 thousands tweets.

The award-winning host posted pictures from his travels around the world and links to his favorite songs.

In 2013, Times magazine named him as one of the persons with best Twitter feeds.

Born to Pierre Bourdain, a classical music industry executive for Columbia records, his eclectic taste in music grew in NJ.

His father would take him to several shows at the Fillmore East, including Jimi Hendrix, Frank Zappa and the Allman Brothers.

An Oyster Ignited His Cooking Passion

In his autobiography, he reminisced a childhood trip to France, where his family was invited by an oyster fisherman named Monsieur Saint-Jour.

With instructions from Monsieur Saint-Jour, he wolfed down the oyster which tasted of seawater, brine and flesh and somehow of the future.

In an interview with First We Feast, Anthony called Iggy Pop an enormous hero of his since the first ‘Stooges’ album.

Iggy has made several appearances on Bourdain’s shows, including an episode of ‘Parts Unknown.’

Anthony shared a daughter with his ex-wife, Ottavia Busia, named Ariane, whom he called his “harshest critic.”

He said that Ariane has a very acute palate and would tell if he over-salted something, instantly.

You will be remembered for your impact, for your legacy