Skip to content
Home » Entertainment » Celebrities Who Died in 2019

Celebrities Who Died in 2019 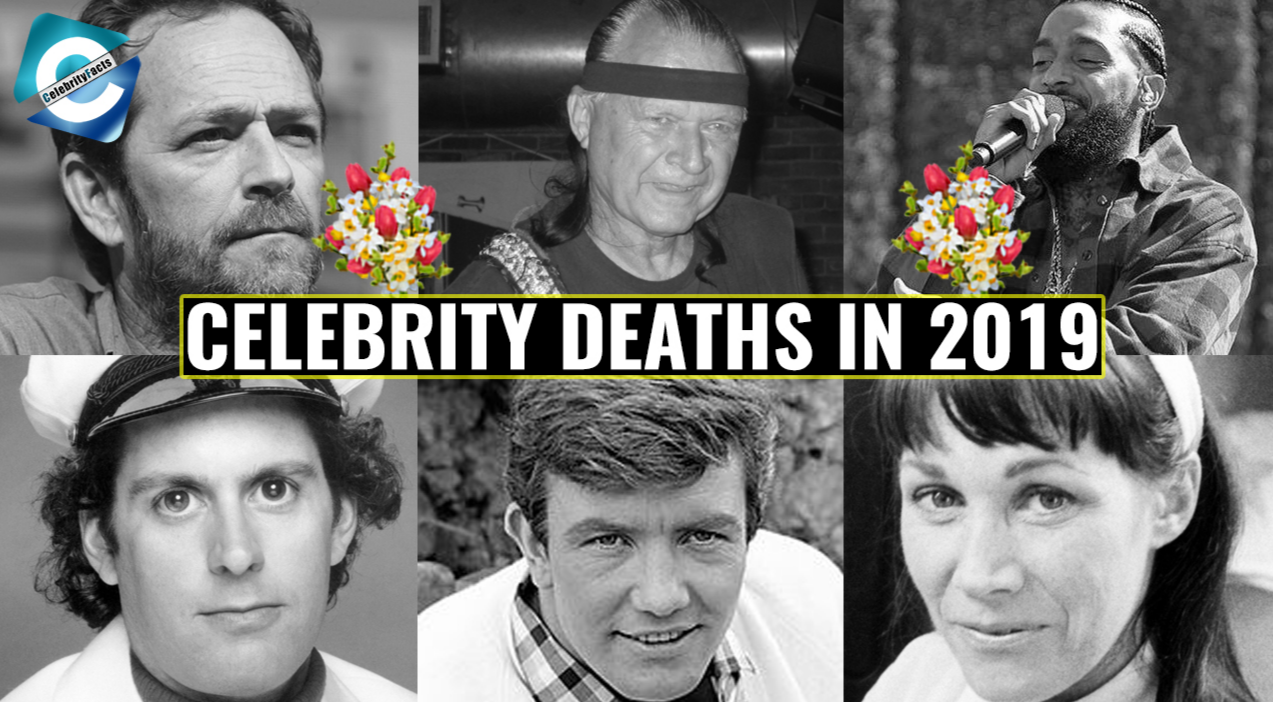 Gone, but not forgotten! Many well-known figures have left the world this year, but their legacy also continues. Each year, we bid goodbye to numerous stars, who are remembered for their music, the roles they portrayed, their service to the nation or their activism and more. Today, we remember the celebrities who sadly passed away so far in 2019.

The American singer, songwriter, and environmentalist sadly passed away of cancer at 66 on January 1, 2019, in Mountain View, California.

Pegi Young married a Canadian singer-songwriter for more than 36 years and had two children, Ben and Amber. Neil wrote several songs about their love, including Unknown Legend, Harvest Moon and Such an Angel. They performed together in his band for many years. She released her self-titled debut EP and went on releasing four more albums and touring extensively.

Alongside music, she devoted most of her time and energy to the Bridge School, an esteemed institution she founded in 1986. The organization helps kids like her son Ben (born with cerebral palsy) with severe speech and physical impairments.

Daryl Dragon, the “Captain” half of the pop duo, the Captain and Tennille, passed away of kidney failure at a hospice in Prescott, Arizona, on January 2, 2019.

The group was known for a string of soft-rock hits in the 1970s, including Love Will Keep Us Together Muskrat Love, The Way I Want to Touch You, and Lonely Night (Angel Face).

When his death, Ms. Tennille, his former wife and singing partner, was by his side. She stated,

“He was a brilliant musician with many friends who loved him greatly. I was at my most creative in my life when I was with him.”

A two-time Emmy winner and creator of stuntman character Super Dave Osbourne, Bob Einstein died on January 2, 2019, in Indian Wells, CA. Morever, he was diagnosed with cancer shortly before his death. He was 76.

The comedian started as a writer on several variety TV shows, including The Smothers Brothers Comedy Hour and The Sonny & Cher Comedy Hour. Fans also remember Bob for his roles as Larry Middleman on Arrested Development and Marty Funkhouser in Curb Your Enthusiasm. He played Super Dave Osborne’s character in sketch comedy, Bizarre and had frequent guest appearances on Late Night with David Letterman.

After a battle with cancer, Steve Ripley, the frontman of Grammy-nominated country-rock band the Tractors, passed away on January 3, 2019, at his home in Pawnee, Oklahoma. He was 69.

With Ripley at the helm, the Tractors scored their biggest hit with their debut single, Baby Likes to Rock It,  in 1994. As a producer, recording engineer, and studio musician, he worked with Bob Dylan and many other esteemed artists. He started Ripley Guitars in 1982 and built guitars for Eddie Van Halen, Steve Lukather, J. J. Cale, Ry Cooder, John Hiatt, and Jimmy Buffett, before forming The Church Studio in 1987. He formed the Tractors in 1994.

American singer Clydie King, famous for her earthy, gospel-rooted voice, passed away on January 7, 2019, at the age of 75. The New York Times reported the cause to be the complications of a blood infection received during dialysis treatment.

One of the most in-demand backup and session singers of her time, King worked as a backing vocalist for Ray Charles, Bob Dylan and dozens of other superstars. She sang famous hits, including Rolling Stones’ Tumbling Dice and Lynyrd Skynyrd’s Sweet Home Alabama.

King sang on albums by Steely Dan,  Joe Walsh, Humble Pie, Carly Simon, Phil Ochs, Ringo Starr, and Neil Diamond. She also sang to Barbra Streisand’s A Star Is Born remake in the soundtrack. Bob Dylan had been secretly married to King and had two children with her.

In Maine, Verna Bloom died at the age of 80 on January 9, 2019. The cause of death was reported to be the complications of dementia.

Bloom is survived by her husband, Jay Cocks, an American film critic and screenwriter.

American soul and R&B singer Maxine Brown Russell died on January 21, in hospice care in Little Rock, Arkansas, from kidney and heart disease complications. She was 87.

The two-time Grammy winner, James Ingram, died on January 29, 2019, after a long battle with brain cancer at the age of 66.

Since starting his career in 1973, Ingram had charted 8 Top 40 hits on the U.S. Billboard Hot 100 from the early 1980s until the early 1990s and 13 top 40 hits on the Hot R&B/Hip-Hop Songs chart. Ingram co-wrote The Day I Fall in Love from Beethoven’s 2nd (1993) and Look What Love Has Done from Junior (1994), which earned him nominations for Oscars, Golden Globes and Grammy for Best Original Song.

Miller made hundreds of on-screen appearances within a career spanning more than six decades. He starred as Walter Paisley in the cult classic, A Bucket of Blood before going on to land roles on projects such as The Burbs, Fame and The Terminator.

He is survived by his wife Lainie, daughter Barbara and granddaughter Autumn and is recognized as “the king of character actors.”

Kristoff St. John died at his Los Angeles, California, home on February 3, 2019, due to hypertrophic heart failure at 52.

Karl Lagerfeld, a German creative director, fashion designer, artist, and photographer, from complications of pancreatic cancer, on February 19, 2019, in Paris, France. Fans guessed him to be 85.

One of the best actors of Golden Age Hollywood, Julie Adams, passed away on February 3 in Los Angeles, California, aged 92.

Best known for playing the role of Kay Lawrence in the movie Creature from the Black Lagoon, Julie appeared in several movies during the 50s and 60s, including Bend of the River, The Mississippi Gambler, and One Desire. She graced the silver screens, guest-starring in numerous TV series. She appeared on the shows like 77 Sunset Strip, Alfred Hitchcock Presents, The Andy Griffith Show, and Maverick.

British actor Albert Finney passed away on February 7 of chest infections at the Royal Marsden Hospital in London at 82.

Finney was one of the prolific actors of his time. Best known for appearing in movies such as Erin Brockovich and Tom Jones, Finney was nominated for 5 Academy Awards but never attained the awards ceremony. He was also offered the CBE in 1980 but turned it down, calling it “perpetuating snobbery.”

He is survived by his wife, Pene Delmage, and his son from his first marriage to Jane Wenham.

Better known as The First Lady of Jazz, Ethel Ennis passed away at 86 from a stroke on February 17. Ethel had a career spanning over seven decades.

We lost one of the greatest baseball players, Frank Robinson, on February 7, 2019, due to bone cancer at 83.

Frank became the only player named Most Valuable Player (MVP) of both the National League (NL) and the American League (AL). Frank, a 14-time All-Star, batted 309 times, hit 30 home runs eleven times, and led his league in slugging four times. In 1982, he was inducted into the Baseball Hall of Fame.

Frank is survived by his wife, Barbara Ann Cole and their two children.

The Voice contestant Janice Freeman passed away at the age of 33 on March 2 due to extreme pneumonia and blood clotting cases.

Janice had become a fan favorite contestant following her stunning performance during the Blind Auditions of The Voice season 13. She stunned the judges and fans with her beautiful rendition of Radioactive by Imagine Dragons. Janice had made it to the top 11 of the singing reality show.

Janice is survived by her husband, Dion and a daughter.

The 90s heartthrob Luke Perry passed away on February 4 with complications of a stroke at 52.

Luke Perry starred in some of the most iconic TV shows in the 90s, like Beverly Hills, 90210, and Spin City, and voiced Sub-Zero in animated Mortal Kombat: Defenders of the Realm. Perry was starring in CW’s series Riverdale and is set to appear in Quentin Tarantino’s ninth movie, Once Upon a Time in Hollywood.

Luke engaged the former actress Wendy Madison Bauer at his death. Following his death, the Reelz channel announced that they would be making a documentary titled Luke Perry: In His Own Words.

Prodigy frontman Keith Flint took his own life at the age of 49 at his home in Essex on March 4.

Keith started his career as a dancer. Prodigy founder Liam Howlet discovered the late artist and asked him to be the band’s vocalist. With Prodigy, he recorded and released songs like Firestarter and Breathe. Keith also had a band named Flint.

Apart from being a singer, he was also a motorbike enthusiast who owned a motorcycle team called Team Traction Control, winning three Isle of Man TT.

His funeral was held on March 29. Keith is survived by his wife, Mayumi Kai.

Better known as “The King of the Surf Guitar,” Dick Dale passed away on March 16 at 81. Dale had been undergoing kidney and heart treatment before his death.

Many music lovers regarded Dale as the pioneer of surf music. He was also the first person to play the first-ever 100-watt guitar amplifier. Dale released nine studio albums throughout his career.

West Coast rapper Nipsey Hussle was shot and killed on March 31. Hussle died at the age of 33 outside his clothing shop, Marathon Clothing in LA.

Nipsey Hussle rose to fame, releasing mixtapes including, Bullets Ain’t Got No Name series, The Marathon, The Marathon Continues and Crenshaw. He released his first studio album, Victory Lap, in February 2018, which was nominated for Best Rap Album at the 61st Annual Grammy Awards this year.

Hussle was in a relationship with actress Lauren London at his death. They had a child together. Following his death, many rappers and his friends supported Nipsey’s family. Police identified 29-year-old Eric Holder as the murderer and charged him with murder on April 2.