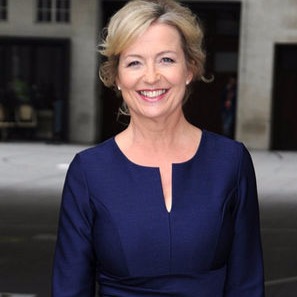 A prominent weather presenter from Scotland, Carol Kirkwood is best known for her work on BBC Breakfast. She has received eight TRIC awards for Best TV Weather Presenter. In 2015, she also participated in the 13th season of Strictly Come Dancing, where she partnered with Pasha Kovalev.

Carol was born on 29th May 1962, in Morar, Invernesshire, Scotland as Carol MacKellaig. Her parents used to run a hotel in Morar. She attended the Lochaber High School in Fort William and has a BA from Edinburgh Napier University (then Napier College of Commerce and Technology).

Carol joined BBC News channel in the year 1998 as a professional weather presenter. Thereafter, she contributed to BBC family shows including BBC Weather, BBC World, BBC News at Six and many others. She has also made a guest appearance on Hacker Time, a CBBC show, and presented the live forecasts of the Wimbledon Tennis Championships.

She was previously married to Jimmy Kirkwood for 25 years. In 2015, she revealed that she was dating someone, however, her current relationship status remains unknown.