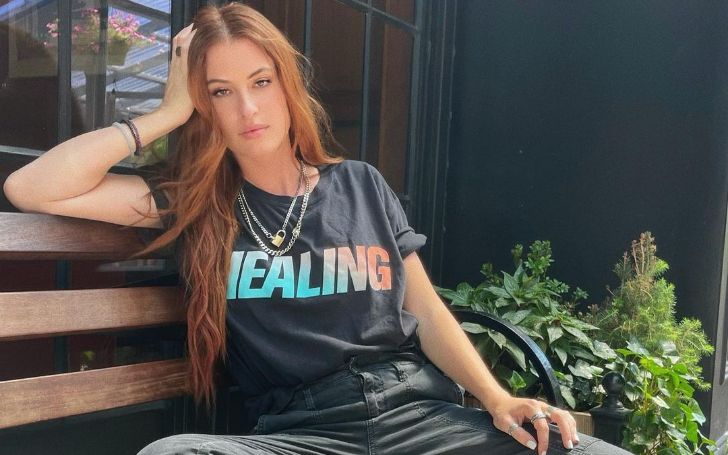 Cari Elise Fletcher is popularly known for her nickname Fletcher. Further, she is an American singer and songwriter. Furthermore, Elise rose to fame after competing in the premiere season of The X Factor.

If Cari is your favorite singer, you want to learn more about Cari’s personal and private life. So, let’s go through the complete article below without wasting your time. We’re starting with Fletcher’s bio!

Who is Cari Elise Fletcher? Learn her Age, Family, and Education

On March 19, 1994, Cari Elise Fletcher was born in Asbury Park, New Jersey, the United States of America. Her heritage is Caucasian, and she is an American citizen as well. Further, she was born under the Zodiac sign of Pisces. As of 2022, this talented American artist turned 28 years old.

Cari is the daughter of her father, Bob Fletcher, and her mother, Noreen Fletcher. Further, her father owned a car dealership and her mother flight attendant. She grew up along with her younger brother Bobby.

Furthermore, Fletcher is a well-educated singer. She attended Wall High School in Wall Township, New Jersey, and graduated from there in 2012. After that, Her Body Is Bible singer enrolled at the Clive Davis Institute of Recorded Music at New York University. Not only that, but she also started learning vocal class when she was just five years old.

Who is Cari Elise Fletcher married to?

The American singer Cari is not a married nor a single woman. Further, she is in a romantic relationship with her girlfriend, Shannon Beveridge. Besides that, her girlfriend Shannon is a YouTuber, a photographer, and an outspoken LGBT activist.

Moreover, there is no record of when they first met. However, the couple started dating in 2017. However, there is news about the breakup during the mid-quantities, but still, they are seen together. As we get any information about their relationship, we’ll keep you posted.

5 feet 7 inches tall singer Cari had at least one relationship in her past. But, she has not to revealed any relationship regarding her private life. She seems to be quite secretive, so she keeps her past affairs behind the curtain.

Is Cari a lesbian?

Twenty-seven years old Fletcher is a lesbian, and there is no doubt about her sexuality. Further, she belongs to the LGBTQ+ community and actively supports groups like GLAAD, The Trevor Project, and It Gets Better.

Also, find out Who is Lisa From Blackpink Debuts her Solo Career

In support of sexual assault survivors, Fletcher published “I Believe You.” In addition, she supported the campaign by appearing at It’s On Us and the United States of Women Summit. Later, she’s also taken part in Girl Up and the Teen Vogue Summit to advocate for women’s empowerment.

How much is the Net Worth of Cari Elise Fletcher?

The singer of “Live Young, Die Free” Fletcher has earned an impressive net worth throughout her successful career. Further, she holds a net worth of around $1.3 million.

Moreover, her main source of income is her music career. She released her first song, “War Paint,” collaborating with producer Jamie Kenney. In 2016, she released her solo single “Wasted Youth,” which scored No. 1 on Billboard’s Emerging Artist Chart.

In other words, she also makes money through different advertisements, sponsorship, and endorsements. Likewise, she earns around $1,335 to $2,225 per sponsored post on her Instagram. She also gains some amount from her Tiktok sponsorship, about $228 to $381.

Similarly, the artist has a huge fan following on her Twitter, followed by 152.6k followers on her account. Likewise, she is also there on her TikTok account, where she holds 379.3k followers.

In the same vein, she has 217k followers on her Facebook page. Aside from these accounts, Fletcher also runs a YouTube channel. Moreover, Cari started her channel on March 1st, 2015. And over the years, her videos gained over 117,014,371 views.

Stay tuned with E-Celebrity Facts to learn more about the top 10 news.