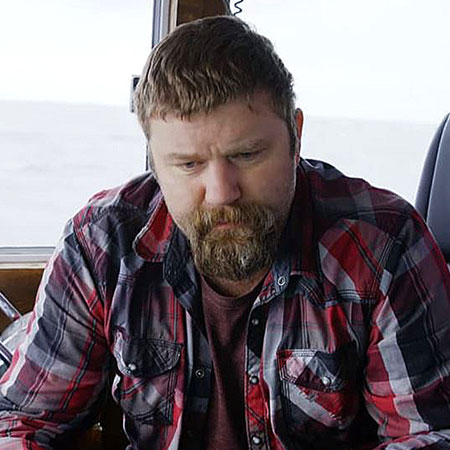 Scott Campbell Jr. was an ordinary fisherman in Alaska until Discovery network’s cameras started rolling on his F/V Seabrooke.

His crab catching instinct got an exposure after he started appearing in ‘Deadliest Catch.’

He is a second-generation fisherman, who was born in Walla Walla, Washington, in May 6, 1974 to a professional crabber, Scott Campbell Sr.

He used to finish his school assignments early so that he would be able to participate in tendering salmon during summer.

He was just 15 when he joined his father in the sea, and following the same passion, he flew to Alaska right after graduating high school.

Scott Sr. didn’t want his son to follow the same path, which entailed long months away from the family and long hours in the brutal Bering Sea.

However, with his strong mindset to be a fisherman, he became a “relief captain” for his father at 24.

Later, at 26, he became one of the youngest captains in the fleet when he took command of the F/V Seabrooke.

Setting out the biggest challenges at such a young age led him to rough path quite a several times.

Once his boat lost power during a storm, and while he was running down the engine room, a huge wave threw him on the top of an air compressor.

Despite the severe injury on his right ring finger, he returned to the fishing grounds considering his crew’s economy.

Later, he took retirement from crab fishing because of serious health issues which stemmed from his numerous back surgeries.

He has detailed his experiences in a memoir, Giving the Finger: Risking It All to Fish the World’s Deadliest Sea.

He still co-owns and manages F/V Seabrooke, which he once turned from a junker to a top-producing vessel.

Currently, he resides with his wife, Lisa, and two daughters, Stormee and Trinidy, in Meridian, Idaho.

He is the owner of Cordova Coolers, a company producing rotational molded coolers. He is seen promoting his business on social media.