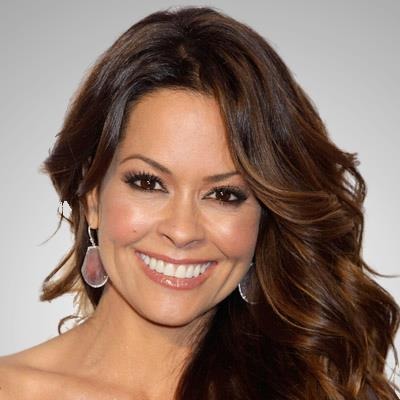 Along with this, she has hosted shows such as She’s Got the Look and 2013 Miss America pageants. We will be able to see her on The New Celebrity Apprentice. A starlet basically noted for her exotic looks, Brooke definitely knows how to steal others thunder.

As Brooke Lisa Burke, she was born on 8th September 1971 in Hartford, Connecticut, United States. Growing up in Tucson Arizona being the oldest amongst seven, she developed striking looks as a result of the multiple heritages including French, Irish, Portuguese from paternal side and Jewish background from the maternal side.

Though she was initially inclined to music and had dreamed of becoming a drummer of a rock band, she took off modeling after winning a beauty pageant at the age of 14. Later, being discovered by a talent agent, she became a professional busy woman by the age of 18 being featured in swimsuit calendars and also in billboards & magazines covers.

Despite heading to Los Angeles to study Broadcast Journalism at University of Los Angeles California, her life took a different turn when she was signed by the modeling agencies like Wilhelmina and Ford. Her modeling ventures continued with her appearances in popular advertisements, commercials, swimsuit editorials and others.

Burke’s career took a major turn when she was cast on E! Entertainment network’s series Wild On in 1997. During her three years stint as host in the series, E! Network helped her share familiarity with over 400 million families around 120 countries in the world.

Afterward, emerged as a celebrity actress, she took roles in many movies like That’s Life, Monk, Less Than Perfect, etc. Expanding her career as a fitness & bikini model, she graced Playboy magazine’s cover in 2001. Likewise, she became favorite of several other men’s magazine such as FHM, Maxim, and Stuff.

Branching out her vacations, she participated on the 7th season of ABC hit show Dancing with the Stars finally winning in first place alongside partner Derek Hough. She came in 2010 as co-host of the reality series.

Moreover, proving her business skills, in 2007, she launched an online company called BabooshBaby.com, a specialty line of items that expectant mother should have.

Brooke is also an author. She published her first book A Naked Mom: A Modern Mom’s Fearless Revelations, Savvy Advice, and Soulful Reflections.

Living a husband-less life for nearly a half decade, she exchanged her vows for the second time with an actor David Charvet in 2011. mother of four, Brooke also gave birth to a son Shaya Braven Charvet and daughter Heaven Rain Charvet with her actor husband.

As fanatical as she is about working out and fitness, the actress does have health challenges: chronic lymphocytic thyroiditis and also a melasma (facial skin discolorations mostly happening during pregnant). Successfully battling life-threatening cancer, she is now living a healthy life.

A multi-professional woman, who is known for perfectly taking off her personal and professional voyages without mixing up with one another, has been an inspiration for that woman who failed to stand in it. Branching out into multiple fields, Brooke has carved her name in the global arena of show business and glamor. Still, on her line of ventures, she hasn’t been found involved in any distinctive project at present.