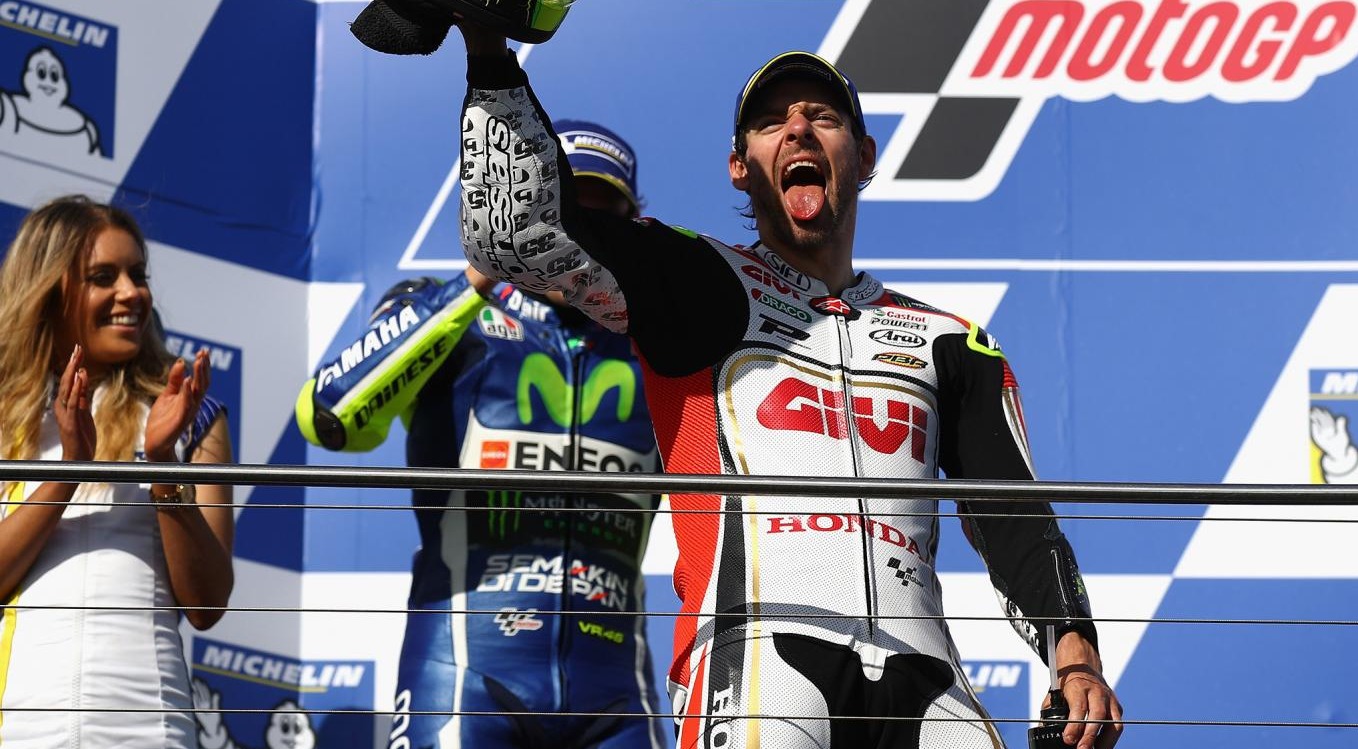 Cal Crutchlow, on Sunday, became the first British rider in almost four decades to win the Australian Grand Prix. In doing so, he secured his second MotoGP victory at Philips Island.

Honda racer Crutchlow became the first British to win more than once in Australia since Barry Sheene won it in 1979.

What a day for my team and I …! Something really special !

Cal Crutchlow helps off that challenge of MotoGP star man Valentino Rossi over 18 laps on Sunday at the Philips Island. The victory on Sunday is the only second career MotoGP victory.

His first victory came in Brno in August. His victory in August was the first in premier class of Grand Prix racing for a British rider in 35 years.

I have waited a long time for this and so has all the dedicated people I have worked with over the years. Thank you …

Cal Crutchlow took full advantage after the World Champion Marc Marquez crashed out while he was leading the race. Cal cashed in on the misfortune of the World champion and led the race.

Once he led the race, the LCR Honda rider didn’t look back and held his nerve despite six times world champion Valentino Rossi chasing him. Rossi’s daunting presence also was not able to stop the British rider Cal as he crossed the line in 40 minutes and 480543 seconds.

The proud and happy Cal after the race said, “I’m really pleased for my team, I was confident I could have won even with Marc in the race. Now I look forward to the last two races and we’ll see what happens next season.”

Current world champion Marc Marquez led the race from the start until he miscalculated his breaking point on the fourth turn on the ninth lap and ended up in trackside gravel.

After the world champion crashed out, Valentino Rossi stormed through the crowd from 15th position to the third position. But despite all his efforts Italian racer Rossi failed to close the 1.9-second gap on Crutchlow.

The race ended in bitter disappointments for Marquez. He was looking for his 6th win of 2016 but failed to do so and took full responsibility for it.

Muchas gracias a toda la gente que siempre está ahí! Thank you so much to all the people who is always there!! #GiveMe5 #MM93

Speaking after the race the world champion said, “I was taking a lot of risks trying to push from the beginning. It was completely my mistake, all season I was careful on the breaking points.”

Marquez remains satisfied as he won the title but believes that they could have left Australia with even more titles.