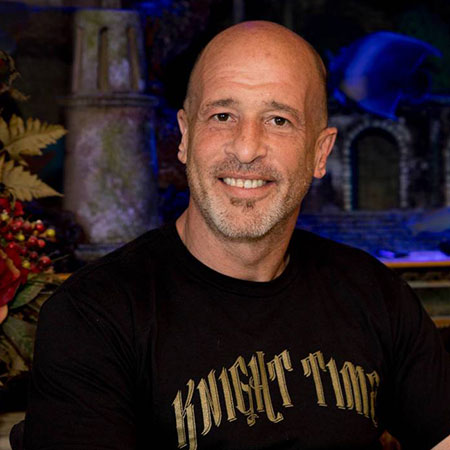 Brett Raymer is an American businessman and TV personality, who is known for appearing in the Animal Planet’s ‘Tanked.’

He is the co-owner of the company, Acrylic Tank Manufacturing, which is the subject of the show.

He graduated from Abraham Lincoln High School, where he played multiple sports, including tennis, football and swimming.

Later, he went to graduate from the Stony Brook University.

Afterward, he moved to Las Vegas to help his family open a tank-building shop.

His sister is the accountant and his father, Irwin Raymer is the office manager of the company.

Animal Planet started documenting ATM on the show, Tanked, after 15 years of its establishment.

In the show, Brett and Wayde are seen taking up the challenges of building awe-inspiring tanks & aquariums for celebrities and athletes, luxury hotels and private homeowners.

When he isn’t busy building fish tanks, he loves to spend time with his two children, Kayla and Bryce.

He has been dating a beautiful lady named Trisha Marie since 2011.

Nowadays, he is also busy with his new business interest in donuts.

He took over as CEO of Donut Mania in summer of 2017 and expanded the shop’s locations in four places within three months.

He has spoken about his plans to expand the stores in Utah and other US states.

Throughout the years, he has racked up a huge net worth of $5 million from his TV appearances and businesses.