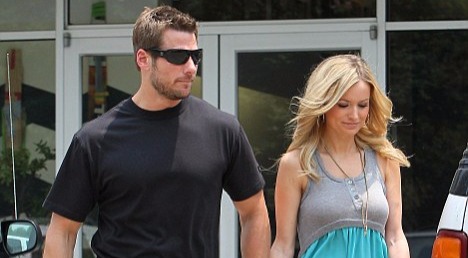 Brad Womack and Emily Maynard got together in 2011 through the reality show. They were engaged shortly just for nearly a month before the break-up.

Fans were like What! after knowing the news of Brad and Emily’s breakup as he was the one to make a record in the history of The Bachelor to reject both the finalists in the season 11 finale.

Womack who had once held the hand of single mom [Emily], called it off just after a month of exchanging rings. The pair got engaged at the end of The Bachelor season 15 and had broken up shortly. And they got back together after the finale. After everything was ended, she had to return 3 karat diamond ring.

Media were raising various speculations claiming that Emily was heading to Brad’s native, Austin Texas. And Emily, who had lost her fiancé in a plane crash and had a full responsibility of her daughter’s upbringing decided to clear all the allegations swirling in media about their relationship and get back to normal life with her baby girl, Ricki. She thought moving randomly being a mom of 6-year-old wasn’t certainly easy for her.

But Brad disagreed to join the on-camera interview to confess the world about the end of their road together. He said, “the demise of our relationship was completely my fault”. The scenario of that time signified that a little affection between the couple was still left.

However, Maynard said, “just we love each other doesn’t mean we’re right for each other.” The brutal break-up didn’t result badly for her. she is now happily married to Tyler Johnson and is now the mom of three including also including two sons: Jennings and Gibson born with Johnson. She has disclosed the more detail about the ups and downs of her relationship with Brad in her book I Said Yes: My Story of Heartbreak, Redemption, and the True Love.

But Brad, who seems focusing on his business at the present time, is yet to be married. He claims Maynard was ‘the one’ to whom he got down on knees. In 2013, he was in relationship with AshLee Frazier, season 17 contestant. Now, he is believed to be single.