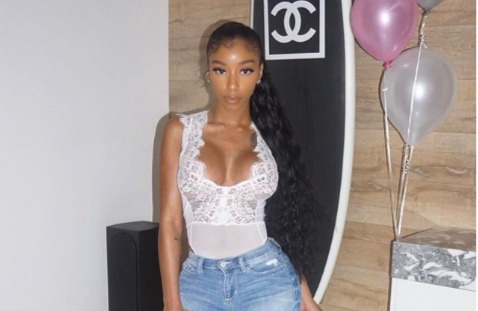 Ashley Burgos is the daughter of an Instagram model and entrepreneur Bernice Burgos. Ashley is also a model and a businesswoman. She and Bernice have their own sleepwear collection called Bold & Beautiful. Her mother has starred in a number of rap music videos and has dated Drake and T.I.

Ashley Burgos was born on May 9, 1996, in New York City, New York as Ashley Marie Burgos.

Her mother was only 15 years old when she was born, while her father was 19. Bernice hasn’t yet revealed the name of Ashley’s biological father. Ashley has a sister named Sarai Burgos who is ten years younger than her.

Ashley has launched a sleepwear collection called Bold & Beautiful with Bernice. Their sleepwear line features sporty and sexy pajama sets, rompers, briefs and bralettes which can be bought from their official website at  www.bold-beautiful.com.

You can follow Ashley Burgos on Instagram @iam_amarie. As of October 2017, the budding model has amassed huge followers.

She often models the pieces from her Bold & Beautiful collection and shows off her dangerous curves in revealing outfits and swimwears.

Initially, there were rumors that Bernice Burgos’ daughter Ashley is pregnant. Ashley’s absence from social media sites like Instagram and Snapchat had fueled the rumor, following which Bernice has made a video in which she confirms that her daughter is pregnant and that she has her back.

While the news has been shocking for many of Ashley’s fans, there are also some people who are shocked to know that Bernice has a 21-year-old daughter.

Ashley Bergos welcomed a baby girl earlier this year. She shared a snap of her daughter on her official Instagram account on March 15.

Since then, she has been sharing snaps of her daughter in the image-sharing platform. She named her baby India Ava.