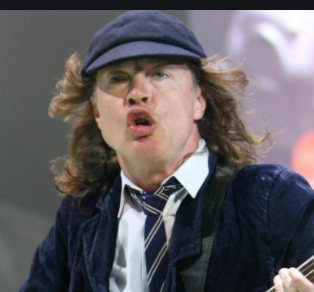 Angus Young, who is the co-founder of the famous hard rock band, AC/DC, has a net worth of $150 million and an extensive collection of guitars.

He bought his first guitar, 1970/71 Gibson SG Standard when he was 16 years old from a music shop down the road from his family home in Sydney.

He still owns this guitar, which he bought 42 years ago

Angus went on to buy more Gibson SGs in 1978 at the music store on 48th Street in New York.

This was backup guitar, in case something went wrong with his main SG.

It was used primarily in 1979, during the ‘Let There Be Rock’ movie, in which he used it to play ‘Whole Lotta Rosie.’

The guitar was heavily modified, featuring a white bracing on the headstock, gold hardware, and two pickups.

This guitar was Angus’ main guitar during the ‘For Those About to Rock’ tour in 1981-82.

The guitar could have been made in the mid-70s because Gibson went back to the original small pickguard instead of the big “batwing” pickguard which was used in the late 60s.

The guitar was built in 1981 by UK guitar luthier, John Diggins, and it was given to Angus before the Monsters of Rock concert, in Donington that same year.

He used the guitar in 1983 during the ‘Flick the Switch’ tour.

This guitar was the pickup that was used as a base for Angus Young Signature set, which was released in the 2000s.

The neck of the guitar is most likely a Seymour Duncan SH-PG1 zebra, and its bridge looks like the same one that is used in the Jaydee SG.

Gibson Guitars and Angus Young worked together to create this beauty in 2000s.

This guitar was able to replicate the sound of Angus’s 1970/71 Gibson SG Standard.

It features a bridge pickup which was designed by Angus himself in collaboration with Seymour Duncan and a 57 Classic Humbucker in the neck.

The guitar design varies on every model.

Some have Maestro tremolo, some have big “batwing” pickguards, and some have ‘Devil Schoolboy’ headstock inlay, while others have the regular Gibson Inlays.