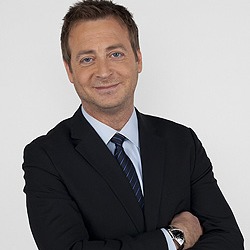 Andy’s professional career in television and as a commentator began when he worked as an associated producer for the NBC news channel. He served there for three years before making way towards Los Angeles where he found love for music and started played keyboards.

His love for music led him playing music for Dalton Grant, who is a singer as well as songwriter. There in the LA he worked for 10 years, including a period when he worked as a publicist for the 69th Annual Academy Awards.

He not only was as a publicist but also as an executive with Guild of America’s Directors. Besides that, he also wrote the blog titled Cranky Insomniac which is inactive since the year 2006.

Likewise, he was also associated with the Red Eye for the two segments titled ‘Halftime Report’ and ‘Postgame Wrap-up’. The show made Andrew popular as TV’s Very Own Andy Levy. Till the year 2009, Levy was TV’s very own but after the show dropped in 2009, Levy had to do with the post of panelist and hence served as a regular panelist.

His humorous nature was always appreciated at his work. One of his humor came out when he delivered a segment titled “Twitter News” where he reported that Pop star Taylor Swift had received free floss from her dentist.

This hilarious comment, at times, has landed him in trouble as well. His catchphrase “I apologize for nothing” led Levy to apologize the Canadian Military in 2009.

Television Journalist and writer, Andrew Levy was born 11th of August, 1966 in Smithtown, United States. The humorous commentator received his education from the Smithtown High School. He accumulated Bachelor’s degree majoring in Political Science from the Columbia University.

After his education, he served as a 31K Combat Signaller in the U.S Army. Likewise, he has also served in the 20th Infantry Regiment which was a part of the 2nd Infantry Division, U.S Army at Demilitarized Zone in the 5th Battalion in Korea, 7th Air Defence Artillery Regiment at Fort Bliss and 4th Battalion.

Passing some lights on his personal life, Andrew is a married man. He is enjoying a blissful ride of marriage with his wife Collin Levy. Collin, by profession, is a speechwriter who has formerly worked in the position of the former US president George W Bush.

The couple is enjoying their blissful relation and seems not to be in a hurry to have children. Information about Andy’s previous girlfriends or dating history has not been published.

The television personality has accumulated fame from his stint on the television and as a humorist. His humor, though at times landed Levy in controversies, has introduced him and his mesmerizing comic timing to the world. His salary and the net worth he has accumulated from his career remains undisclosed but it can be predicted that he surely has a net worth in millions.