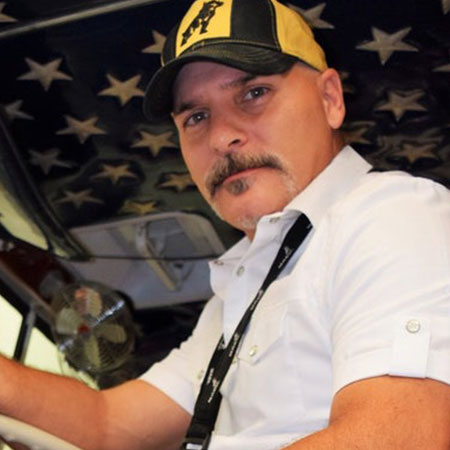 Robb Mariani is a television personality and interior designer, best known as the host of the Speed’s reality show, American Trucker.

A native of the state of Milwaukee, Wisconsin, he grew up among six siblings and began drawing at a very early age.

During his school days, he developed a love for pencil drawings and even participated in a national competition in New York City.

When he was in high school, he worked as a loader for a local trucking company.

The first truck he drove was a 1975 Mack Cruiseliner with a 300 Maxidyne and a five speed…..

From the late 60s to mid-80s, he spent time touring in a motorhome with his family.

Following his passion for arts, he studied graphic design at the University of Wisconsin–Milwaukee in Wisconsin for three years.

In the 1990s, he spent years as a video game designer and animator. His artistic work was featured in the 1995 video game, The Mask.

In 2007, Mariani took part in the 2nd season of HGTV reality show, Design Star, where he ended up at the 4th place.

In 2009, he hosted the Velocity’s automotive series, Car Crazy, for one episode.

In 2011, he had an opportunity to host the Speed TV reality show, American Trucker.

He is working on a documentary about Evel archaeology, Saving Evel, which is set to premiere on August 6, 2018.

The show will be filmed across various regions of the US and Canada.

In a lengthy Facebook post, a self-proclaimed “Truckologist,” has hinted about his plans to launch a new series, Legends of the Road.

To aware people about what trucking has meant to the world, he plans to showcase classic trucks, companies and drivers from the past in the show.