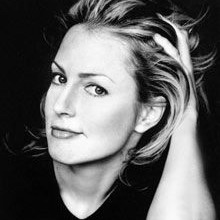 Alexandra Wentworth was born in a prominent family

Alexandra Elliott Wentworth was born on 12th January 1965. Her father Eric Wentworth and mother Muffie Cabot, were both well known due to their involvements with the politics. Since her childhood, she was familiar with all the fascinating side of the media.

For her academics, Wentworth joined Dana Hall School in Massachusetts and later she graduated from Bard College in Hudson, New York.

51 years old Alexandra Wentworth is a married woman. She is married to her husband George Stephanopoulos since the year 2001. The duo tied the knot on 20th November 2001 in New York.

In their 15-year-old marriage, no rumors of divorce or extramarital affairs have come out. The couples seem happy with each other and seem to be enjoying every moment of their blissful relation.

Alexandra had a successful stint on the television

Alexandra Wentworth made her debut in the television on 1992 when she joined Fox channel’s sketch comedy show titled In Living Color. She made her name in the show as an impression of some of the heavyweight names in the US which included Hilary Clinton, Princess Diana, Lisa Marie Presley and Sharon Stone. She ended on association with the show in 1994 after enjoying the best part of two years with the show.

After making her name on the television and after gathering some experiences, Wentworth went on to further explore her career when she made an appearance on The Tonight Show with Jay Leno and on The Oprah Winfrey Show.

In the year 1995, she portrayed the role of Jerry Seinfeld in an episode of Seinfeld “Soup Nazi”. Besides that, her other honorable television appearance came when she co-hosted “Living it up! With Ali & Jack”, a syndicated talk show.

A look at her movie career and her writing career

Her first stint in the movie came in 1996 when she bagged a role in life among Canniballs (1996). The movie made gave her a new challenge in her career and she took the opportunity to further enhance her acting career. The same year, Wentworth was seen in another movie titled Jerry Maguire.

The following year, she appeared in two movies Trial and Error and The real blonde. The year 1999 marked the final year when Wentworth appeared as an actress in Office Space. After a long break from the showbiz industry, Wentworth was seen in 2016 version of television sitcom NightCap.

From her career Wentworth has accumulated a satisfying net worth

Since after Alexandra Wentworth made her debut in the television industry in 1992 she has proclaimed success in every field.

Throughout her career, she has made a name for herself as a versatile and a hardworking actress. And that attribute of her has helped her make a name for herself. In her 2 decades long stint with the show biz industry, she has accumulated a net worth of around 6 million dollars.