Alex Guarnaschelli and her husband and daughter 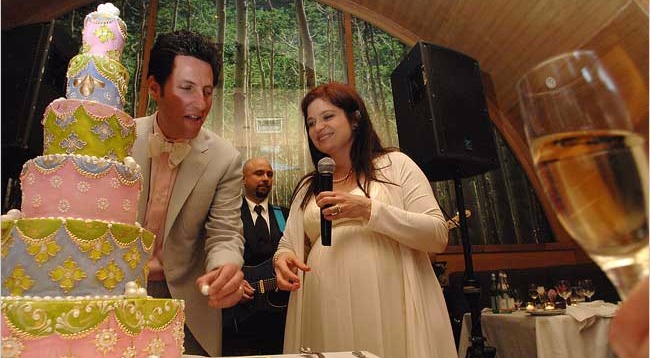 No one can deny Alex Guarnaschelli and her life-long love affair with food & ingredients. And fans are always crazy to know if she has created any unique, lip-smacking, yet healthy dishes.

Moreover, Food Network watchers and Butter restaurant visitors are curious enough to know about her life behind the scenes. Well, Alex is a married woman. And Guarnaschelli is a mother of a daughter too.

How did the love saga of Alex Guarnaschelli and husband Brandon Clark begin?

Passion for food would come easily for Alex Guarnaschelli, but she found romance more challenging from the beginning. She used to think that she would never have a family. Given more than 80 hours a week in the kitchen, she had little time for her love life.

But, things began changing after she met Brandon Clark sometime during 2006 at New York’s Institute of Culinary Education while teaching a fish class. Brandon then attended culinary class and served as a personal injury lawyer in his dad’s law office in New York.

Working late at night at Butter, Alex used to appear with bleary eyes the next day. At that time, Clark said, “I thought she was hilarious. Some people found her intimidating. I found her funny, playful, exciting and adorable.”

Brandon was then trying to change his career and become a professional chef to get closer to Alex without letting her know that he was attracted to her. After that, he joined her in the kitchen. He seemed to enjoy the late hours, lots of sweating, and hot kitchen for a few days.

However, when other cooks in the kitchen started talking about the two, Clark disappeared with no contact and no explanation. After a few weeks, he sent her an e-mail saying that cooking wasn’t what he could do. That made her feel personally rejected.

She tried to convince him, but he wasn’t interested in all that. Amid the complexity due to a difference in their thoughts and career choices, they managed to take their relationship to a romantic level and finally tied the knot on 29th April 2007.

She was pregnant when they exchanged the wedding vows. The ceremony was held at the Butter. One hundred sixty-five guests, including family, friends and fellow chefs, gathered in the barrel-shaped dining hall, where the bride’s creations, including Cavatappi pasta in yellow tomato sauce, Kobe beef empanadas with salsa roasted beef with quiver inducing fresh ramps, were served.

To their blissful paradise graced with love and affection, they welcomed a cute little bundle of joy, a daughter, Ava, in September of the same year, before celebrating their first wedding anniversary.

Alex seems quite confidential nowadays. She doesn’t make public appearances with her family. Once news of Alex and a chef Geoffrey Zakarian’s affair surfaced in the media, Alex and Geoffrey had their own family. They have claimed to be best friends and appeared as judges together on the TV show Chopped.

In May 2013, one of her fans tweeted his curiosity about their relationship, and Alex replied to the tweet by strictly denying the allegations.

Once, she was referred to as ‘Favorite Chef to cook with’ by Zakarian and worked as sous chef for him. Probably, based upon these things, speculations about their affair came.

Alex says her favorite cooking buddy is her daughter. Formerly, she was one of the teachers in All-Star Academy. She got to spread her wings and make a menu of her own choices, and she has got a better platform at the Butter Restaurant to introduce people into her world steeped in food.

Apart from her dishes, shows, and personal life, her weight loss has been a subject of concern to her fans. She, too, is more concerned about this matter. She says that at the beginning of every year, ‘losing weight’ has been her favorite resolution for the year. But cooking delicious dishes for her daughter and finally getting herself in the process has increased her body fat.

Height and Weightloss of Alex

Certainly, maintaining a balance between a love of meals and a trimmed waistline is a hard struggle any foodie should face. As a part of Times’ 1st Health and Wellness Day, she, along with several other professional chefs, said to the crowd that chefs have to stand by the same guidelines of diet & exercise as the rest of us.

Alex said she works out with a trainer 4 or 5 times a week but hasn’t revealed the exercise forms she has been following. A few years back, the 5 feet 4 inches tall had said she used to perform spinning and something like that.