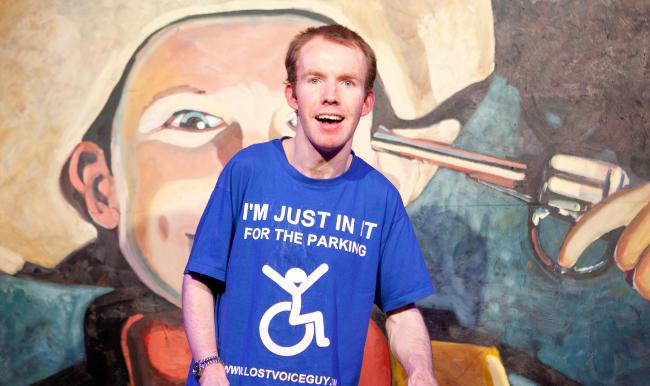 The human spirit is the perseverance and courage that no disability can steal away. Britain’s Got Talent 2018 winner. The Lost Voice Guy is the perfect example of this. He didn’t let his physical challenges win over his passion and aspiration for greatness. Speechless from a very young age, he finally had his dream come true after he made his voice heard to the world through the BGT stage.

The stand-up comedian with cerebral palsy wowed the nation with his self-deprecating brand of humor and won the coveted competition, leaving comedy singer and pianist Robert White in second place and reggae singer Donchez Dacres in the third.

Performing his pre-planned routines from a voice synthesizer on his tablet, he was one of the most intriguing contestants in the show. The comic with no voice made history as the first comedian ever to take home the trophy.

Ridley, who waited 37 years to make his words heard to the world, hasn’t chosen to reveal much about himself. But, here are some facts about him that we know so far.

Ridley was born on December 31, 1980, in Consett, County Durham, England. A brain infection at just six months left him in a coma for two months, and he was diagnosed with cerebral palsy, which affected his movement and speaking ability.

At the age of eight, he got his first communication device. He completed his bachelor’s degree in journalism from the University of Central Lancashire and furthered his studies by majoring in online journalism.

In 2006, he started his journalism career with BBC and a local newspaper and later landed a job as a content manager in Sunderland. Before pursuing a full-time career as a comedian, he also had a stint on the Sunday Sun sports desk in Newcastle.

Before auditioning for Britain’s Got Talent, Lee developed and starred in his show on BBC Radio 4. He had a comedy sitcom, Ability, that ran for two weeks.

He fit in right away in radio, thanks to his experience in journalism. The show was about a man with cerebral palsy who finds it hard to get served in pubs as he was always looking drunk. The show was wholeheartedly funny and was received very well by the audience.

Britain’s Got Talent star Susan Boyle falls prey to yet another bully in her hometown of Blackburn, Scotland.

Now, this is tricky. Lee, who has joked about his computerized voice several times on TV, is looking to bring variations in his dialect by introducing methods to change his voice synthesizer’s accent. His synthesizer’s voice is the same as that of any computer-generated voice.

In 2017, he appeared in a short film, which saw him searching for a new accent for his voice synthesizer. When asked what he would do if he won Britain’s Got Talent, he said,

Having grown a love for comedy, he began performing stand-ups in 2012. Once, he attended a show conducted by the famous British comedian, Ross Noble, who was impersonating Stephen Hawking.

After the show was completed, he challenged Noble that he could do a better imitation of the physicist. Noble, who found the incident funny, incorporated the story into his routine and helped Ridley gain the confidence to pursue his dream of becoming a stand-up comedian. Ridley then bought an iPad voice synthesizer app, Speak It!, to formulate his routines. He began performing in Sunderland before achieving a big break at the Fringe Festival in Edinburgh in 2013.

The busiest man on TV, Stephen Mulhern, has racked up a huge fortune

Before Britain’s Got Talent finals, Ridley suffered a nasty fall at home. He shocked the fans when he tweeted a picture of himself with bruises on his nose and forehead. However, Lee assured fans that Ridley would be ready for the finals. A week later, he showed up on stage and made a few jokes about his accident. Finally, he won the competition.

To what extent does this differently-abled man inspire you? Sound off in the comment section below.

Everything about Britain’s Got Talent star, Charlie Lenehan

What is America’s Got Talent judge Simon Cowell’s net worth in 2018?

Married for eight years, Amanda Holden and her husband Chris Hughes’s relationship is getting stronger and happier. Do you want to know her net worth?