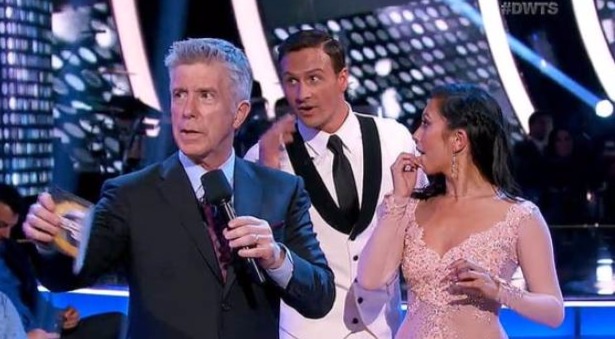 Ryan Lochte was trying to hit the dance floor, shortly after being caught about lying the instance of being robbed at gunpoint at Rio Olympics.

The swimmer made a surprising career choice to help restore his battered reputation. Many took the news of Ryan’s Lochte appearing on Dancing With the Stars as a joke until they saw him on the floor in the season 23 premiere on 12th September.

What hit the several tabloids was Lochte was rushed by the protestors on stage who’re now facing jail time.

The two men entered the stage while Ryan was performing with his pro partner Cheryl Burke. Host Bergeron took the show to the break and the network didn’t broadcast what took place over there.

In an interview after the show’s premiere, Lochte said “So many feelings are going through my head right now. I’m little hurt. I came out here and wanted to do something I am completely uncomfortable with.” Lochte also admitted having participated the show expecting to have best fan support there.

The two men sporting anti-Lochte t-shirts, who rushed onto the stage amid Lochte’s debut performance were Barzeen Soroudi and Sam Sotoodeh. They were detained by the security guards at the meantime and held for police.

The two were taken into custody and are now facing misdemeanor trespassing charges. Fortunately, nobody was hurt in the incident, which took place on the reality show stage amid the mass of audiences.

Olympian Lochte’s being a contestant on the show met with a lot of criticism over his Rio robbery scandal and the suspension that followed.

Optimistic Ryan said on Good Morning America that he hoped America will forgive him so that he can rebuild his image. Obviously, the incident emotionally affected the pair and more to Lochte, who was there to rebuild his reputation.

Many viewers after the incident assembled around the suspended swimmer saying that there’s no excuse for the physical violence and Lochte actually didn’t deserve to be attacked in such a way.

Following the incident, almost all audiences and contestants present there were in his support. Talking about the incident, his fellow DWTS competitor Jana Kramer said – “Ryan was backstage and close to tears. Everyone makes mistakes and I really hope America gets back to see the guy we are all getting to know, which is really, really nice guy.”

Ryan took Instagram to expressed his gratitude for everyone standing on his support after the nasty incident.