Will Smith slaps Chris Rock at the Oscars 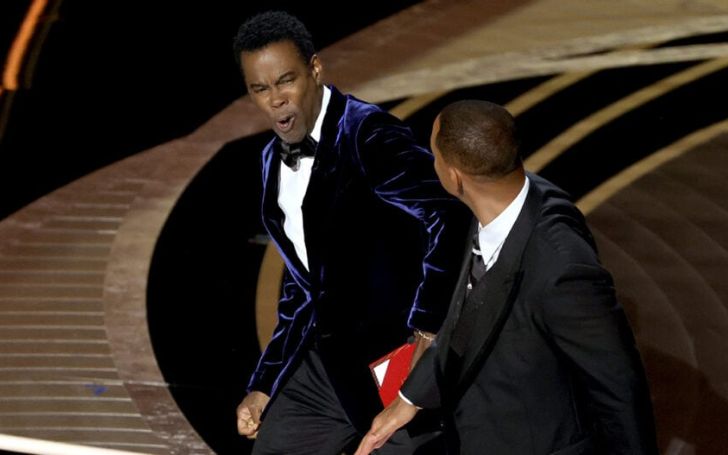 The 2022 Oscars were eventful. The night had glamorous red carpet gowns and some political talks. However, people are still talking about actor Will Smith slapping comedian Chris Rock. The comedian was hosting the show and sharing some jokes with the audience.

However, trouble started brewing when Chris began to crack at Jada Pinkett Smith. He poked fun at Jada’s shaved head, saying, ‘Jada, I love you. ‘G.I. Jane 2,’ can’t wait to see it. Everyone in the room laughed at the joke, including Will Smith. It was clear that they found the joke funny. However, Jada did not react well to the joke, and she was visibly upset at the Oscars.

Chris Rock’s Reaction to getting slapped

After seeing his wife upset, Will Smith walked up to the stage and slapped Chris Rock. However, the comedian did not react with violence. Furthermore, Chris used comedy to defuse the situation.

After the slap, the stand-up comic said,

“WOW! Will Smith just smacked the s*** out of he.”, Rock said as Will went back to his seat.

However, the actor was not finished. After taking his seat, Will yelled at the comedian to keep Jada’s name out of his mouth. Chris Rock tried to defend himself, saying that it was just a joke; however, Will did not have it.

How old is Virginia Springsteen Shave?

Chris Rock was visibly surprised by the incident. But, the comedian gracefully continued hosting the Oscars. In addition, he even called the incident the greatest night in the history of television.

Fans’ Reaction to the slap in The Oscars

Will Smith slapping Chris Rock was trending all over the internet. Fans were shocked and confused about the whole situation. However, the internet has found a new meme template.

Some fans did not understand why Will Smith got violent. Many tweeted they lost respect for the actor. In addition, fans were impressed by how calm and professional Chris Rock remained.

Will Smith apologizes for the incident at the Oscars

On March 29, 2022, Will Smith apologized to Chris Rock in a statement. He said that what he did was out of line. The actor also apologized to the Williams family and the Academy Awards.

Chris Rock, however, has not commented on the incident. Fans were expecting the comedian to talk about the incident as soon as the show was over. But Chris has been silent for days.

The comedian refused to file a police report, and he was seen joking backstage after the slap. Will Smith’s P.R. team hopes his apology will be enough to fix the damage. However, it depends on what Chris Rock has to say.