Who is Scott Pelley married to? Meet his wife and other family members 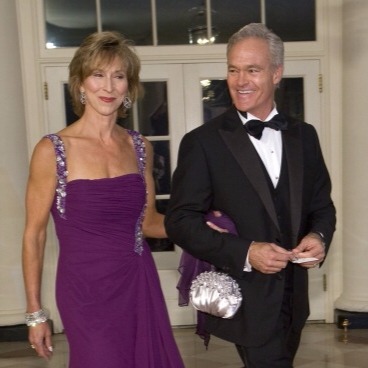 Scott Pelley married his long time sweetheart Jane Boone. The duo’s first met each other in Dallas. Back then Jane noticed Pelley when he was browsing through resume tapes. They dated for a while before tying the knot. As they were working for rival companies, their wedding was titled as ‘Competitors Tie the Knot’ by the media.

The duo’s married in 1983 on the SMU Campus. Even now the campus stands to be one of the memorable places for Pelley as it holds a greater significance in his life. The adorable couple met here, they got married and had their children’s here and they spent the best part of 20 years in SMU campus.

Besides being a dignified husband, Scott Pelley is also a responsible and a loving father

Scott Pelley and wife, Jane Boone are now proud parents of their two adorable children are who are in their teenage now. The couple is parents to son Reece Pelley and daughter Blair Pelley. The couple and their children’s spend most of their time traveling to different places, as Scott hails traveling as a greater source of education.

Scott Pelley takes his role as a father seriously by making sure to attend his children’s school functions. He is often described as the type of dad who takes notes during teachers meet-up and then stays back to ask questions.
He makes sure to be an active presence in their lives by taking them to explore new hobbies or travel to new places together.

Scott Pelley believes in having a strong bond with his family members. He said “Having a stable, rock-solid marriage is an indispensable element. I’ve known a lot of people at the network who’ve had their family crack up.”

Scott Pelley has been married to Jane Boone for 29 years and has spoken out about being a committed husband. We can infer that as a sign that they aren’t heading for divorce anytime soon. A loyal and understanding husband, Scott Pelly, has great father and role model to his children.