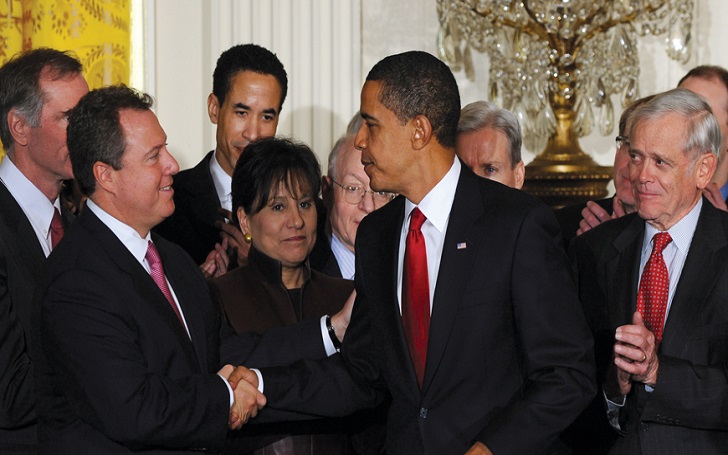 Robert Wolf is a former President and Chief Operating Officer of UBS Investment Bank, as well as Chairman and CEO of UBS’s Group Americas division. He is also an American contributor for Fox News Channel and Fox News Network since 2016.

Further, he was a member of UBS’s Group Executive Board from 2008-2010. Most importantly, he is a friend of United States President Barack Obama.

Robert Wolf was born on March 8, 1962. Wolf is a graduate of the Wharton School at the University of Pennsylvania, receiving a B.S. in Economics in 1984. He also received the Distinguished Alumni Award from the Wharton School in May 2014.

Wolf grew up in Marblehead, Massachusetts, and is in the town’s Athletics Hall of Fame. He is the husband of Carol, who is a corporate attorney who is currently the Director of Special Projects for the RFK Center. He is blessed with two children.

Moreover, he is the Founder and CEO of 32 Advisors, a boutique consulting and advisory firm serving public and private companies, hedge funds, private equity firms, money managers, governments, and other institutions.

The Net Worth Of Robert Wolf & Career

Robert is a contributor for Fox News and he is also a founder of 32 Advisors. His salary is $175000 annually. His net worth is growing significantly. Therefore, he an estimated net worth of $5.5 million.

Robert Wolf began his career in Fixed Income at the now-defunct investment bank, Salomon Brothers. Wolf is the Founder of 32 Advisors, a holding company that includes the direct venture capital investing arm 32 Ventures. He joined UBS in 1994 after spending approximately 10 years at Salomon Brothers. He was Global Head of Fixed Income of the Investment Bank, from 2002-2004, while at UBS, and previously, from 1998 to 2001, Global Head of Credit Trading, Research & Distribution.

Wolf held three Presidential appointments under President Obama; as a member of the Economic Recovery Advisory Board from 2009-2011, the Council on Jobs and Competitiveness from 2011-2013, and the Export Council from 2014-2016. In 2012 Wolf was on the Homeland Security Advisory Council’s Border Infrastructure Task Force. In 2017, he was named to the Board of Directors for the Obama Foundation and Chairs the Foundation’s Audit and Risk Committee.

Further, in 2012 Wolf was on the Homeland Security Advisory Council’s Border Infrastructure Task Force. And in June 2013, the White House appointed Wolf to the President’s Export Council. Robert also serves on the boards of a number of non-profit institutions including the Children’s Aid Society and the Partnership for NYC.

Wolf was honored with the Corporate Leadership Award at the 2007 Fall Gala alongside. He also received Promise Award from the Children’s Aid Society, for his commitment to helping children living in poverty thrive and succeed in 2011.

Further, he was regarded with great respect at the Ivy League Football Association dinner in February 2013 as UPenn’s representative 2013.

The former Chairman and CEO of UBS Americas and the former President and COO of UBS Investment Bank. he is active in social media(Twitters). As a result, he holds 17.5k followers of Twitter.

We hope you enjoyed the article, for more Biographies make sure to bookmark E-Celebrity Facts.