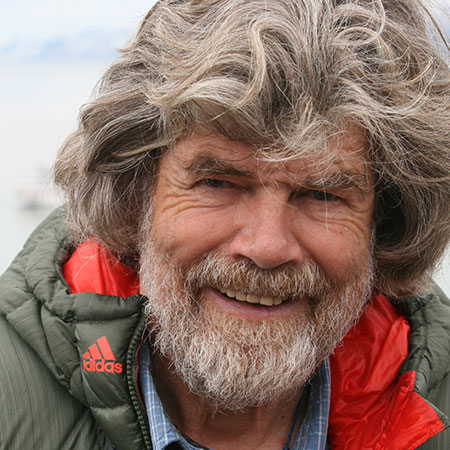 Italian mountaineer Reinhold Messner is one of the greatest adventurers in the world.

He has conquered all 14 peaks over 8000 meters and is the first man ever to have climbed the Mount Everest alone without supplemental oxygen.

He also holds the record as the first person ever to have crossed Antarctica and Greenland without snowmobiles or dog sleds.

Additionally, the extreme adventurer has the distinction of crossing the Gobi Desert alone.

His mother tongue is German, but he is fluent in English and Italian too.

Growing up in Villnöß, he spent his early years climbing in the Alps and fell in love with the Dolomites.

Sounds quite crazy! His father, Josef Messner, a teacher led him to his first summit at the age of five.

When he was in his early twenties, he and his brother Günther were counted among Europe’s best climbers.

Inspired by Hermann Buhl in the 1960s, he started alpine mountaineering, which consisted of climbing with light equipment and minimum extra help.

His achieved his first major success in 1970 when he climbed the Rupal face of Nanga Parbat.

At the same time, he had to overcome the tragedy of losing his brother, Günther, who died on the descent of the Diamir face.

Not only that, but he also lost seven toes to frostbite during the climb and required amputation. A 2010 movie ‘Nanga Parbat’ is based on those incidents.

He made his solo ascent of the Diamir face of Nanga Parbat in 1978.

In 1978, he along with Peter Habeler reached the summit of Mt. Everest without supplemental oxygen, and he repeated the feat from the Tibetan side without Habeler in 1980.

He has written over 60 books about his mountaineering experiences and was featured in a 1984 movie, The Dark Glow of the Mountains.

Nowadays, he devotes himself to the Messner Mountain Museum, which he founded to educate visitors about the science of mountain and glaciers.

The museum project is based at six different locations: Juval, Firmian, Dolomites, Ortles, Ripa and Corones.

His son, Simon Geaser Messner has also followed his footsteps.

He is regular on Facebook, where he is seen sharing posts about his recent ventures.