OMG! Chandler Riggs is dating Brianna Maphis. Girlfriend stared a cute pic on twitter on his birthday. Take a look 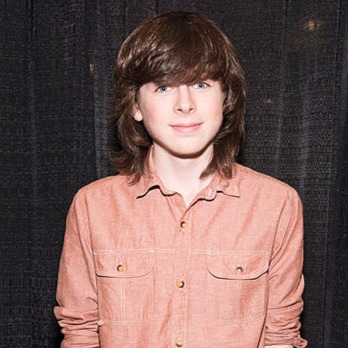 Chandler Riggs celebrated his birthday with his girlfriend, Brianna Maphis. Reported to be dating for over a year now, the sweet couple is setting relationship goals.

Beautiful as it seems, Chandler Riggs is a proud boyfriend

The Walking Dead actor, Chandler Riggs, is proud of his graduate girlfriend, Brianna Maphis, as he discloses his pride on Instagram.

Both consistently share their special moments on Twitter and Instagram and this t=ime, we saw Riggs sharing his happiness on the achievement of his girlfriend. It was the graduation day of Brianna, and Chandler thought of sharing this huge news with all of his fans.

so proud of her

Let’s not forget their prom picture. Brianna looked exceptionally gorgeous in that black dress and beautiful smile. On her side stood the handsome Riggs in a black tuxedo, complementing Brianna’s beauty. This beautifully framed picture posted by Chandler on his Instagram, @chandlerriggs5, has 217K likes. That’s absolutely incredible!

Brianna is also interested in acting as she was a part of Alice In Wonderland Jr. stage production. She is not yet a Hollywood actress as we haven’t seen her in the movies yet but hope to see her in reel opposite her real life love soon.

It’s not known since when they started dating but seeing her tweet, they are speculated to be dating for a year now. She tweeted that she is with Chandler on a cruise but they might be friends at the time and slowly upgraded their relationship. Since they haven’t cleared it out, we cannot be certain.

Chandler completed his 17 years in this world on June 27. Who could possibly be the best person he could celebrate his birthday with?

No doubt it’s his sweetheart Brianna. Brianna wished him a happy birthday on Twitter and shared an absolutely adorable picture of them together.

As she hugged him from behind and the way Chandler looks at her, it was a picture perfect snap. The two look so much in love. Aww! Relationship goals!!

wishing a very happy bday to my best friend i love you sooooo much pic.twitter.com/qZ6era6g7b

An amazing fact about them is that Brianna is a year older than Chandler but age doesn’t matter when there is love. May the couple grow stronger and stronger as the years pass.

Chandler Riggs and girlfriend, Brianna Maphis, celebrated his birthday together recently. As both are openly posting tweets and pics reflecting their relationship, they are definitely dating. Here's a video of Chandler doing a Q&A session at FanX 2016.