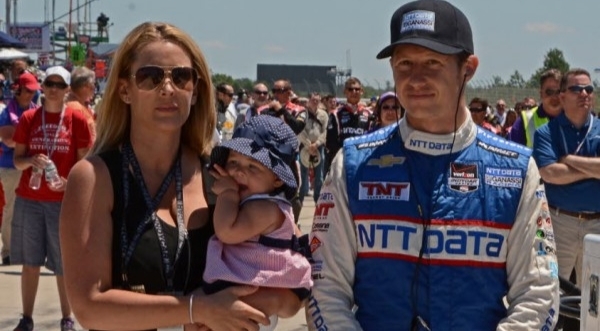 Nicole Briscoe is an American born talented and beautiful lady, who is sportscaster by profession. Briscoe, who has been working with ESPN since 2008, is also a former beauty pageant holder.

She started as anchor of “SportsCenter” and studio show host in 2015 after serving various roles in ESPN’s NASCAR coverage from 2008-14 that included as host of “NASCAR Now” and “NASCAR COUNTDOWN”. She is married to Ryan Briscoe, an IndyCar Series since 2009.

As Nicole Manske, she was born in Wausau, Wisconsin, U.S. on 2nd July 1980. She graduated in 1998 from Hononegah High School, where she and Danica Patrick were cheerleaders. Winner of Miss Illinois Teen USA title, Nicole also took part Miss Teen USA the same year, where she was one of the semi-finalists. Afterward, in 2001, the green-eyed beauty competed in Miss Illinois USA pageant and ended up as 1st runner-up to the winner, Rebecca Ambrosi.

Briscoe attended Northern Western University and it was the time when she earned her first job for WREX-TV. She then worked in Fort Wayne, Indiana for WANE-TV as general assignment reporter prior to joining WISH-TV in Indiana polis in April 2004.

While working for WISH-TV, she was known to cover, Indianapolis 500, Indianapolis Colts of NFL, United States Grand Prix, and NBA’s Indiana Pacers. She left WISH-TV for the Speed Channel in 2006 and started working as co-host of “The Sunday Report”, a motorsports program. Replacing the Connie LeGrand, she served as the host of the program from 2006 to January 2008, until she left to work as host of ESPN2’s daily news program “NASCAR NOW”.

Former beauty queen, Briscoe has a professional Australian racing driver as her soulmate, who is none other than an IndyCar Series driver, Ryan Briscoe. After several months of having romantic dates together, the power couple in sports exchanged their vows in 2009 in an outdoor ceremony.

Reportedly the blessed couple welcomed their first baby in December 2013 and named the lovable baby as Finley. But no any authoritative sources have claimed anything about her child yet.

The beautiful and talented sportscaster Nicole Briscoe from America is associated with ESPN as a sportscaster. Moreover to anchoring “SportsCenter” on ESPN, she also contributes as a reporter to “X Games” coverage.